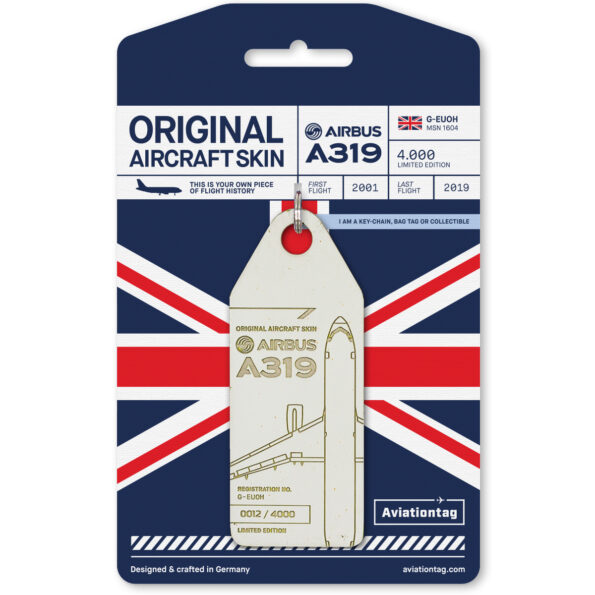 Keychain made of real aircraft skin: A319 G-EUOH (Aviationtag 4260411671527)
€ 20.62
EU: incl. tax € 24.95
Reduced shipping charge may be applicable depending on country of destination and contents of shopping cart. Will be shown before checkout.

This product was added to our database on Tuesday 17 November 2020.

Introducing our first Speedbird, which was actually also an Olympic dove: the former British Airways Airbus A319-100 sporting registration G-EUOH. In December 2001, MSN 1604 left Airbus' factory doors headed for the British flag carrier in a single class configuration with 132 seats.

During its 17 years of active service for British Airways, G-EUOH enjoyed the privilege of being one of just nine planes between 2012 and 2015 to take to the skies with a special livery to mark the London 2012 Olympic Games. In designer Pascal Anson's livery, which also covered the wings and engines, the plane had the look of a golden dove.

In 2015, MSN 1604 returned to its classic British Airways livery and remained in service for the Oneworld member until 2019. This Aviationtag edition proudly preserves a piece of British aviation and Olympic history for posterity.

Go, get yours now and keep the olympic spirit alive!