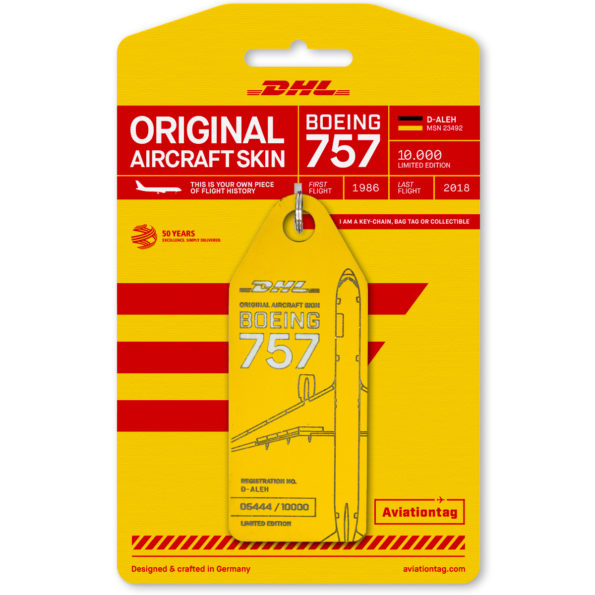 Keychain made of real aircraft skin: Boeing 757-200 DHL D-ALEH (Aviationtag DHL D-ALEH)
€ 23.10
EU: incl. tax € 27.95
Reduced shipping charge may be applicable depending on country of destination and contents of shopping cart. Will be shown before checkout.

This product was added to our database on Thursday 24 October 2019.

The Boeing 757-200 was delivered to British Airways in Renton in 1986 with the manufacturer serial number (MSN) 23492 and line number 89, originally as a passenger aircraft. BA christened it "Belvoir Castle" and registered it as G-BIKW.

In 2001, British Airways retired the Boeing from its fleet and in 2003, European Air Transport converted it into a purely cargo aircraft with the registration OO-DPK. As of then it flew as "operated for" DHL.

In 2010 it was re-assigned to ETA Leipzig and given its German registration: D-ALEH. Shortly before the end of 2018, the Boeing 757-200F was decommissioned and parked in Castellon, Spain. This year, it was finally upcycled by Aviationtag into a special anniversary edition celebrating 50 years of DHL.

Get your special piece of aviation history and a special part of DHL history now!