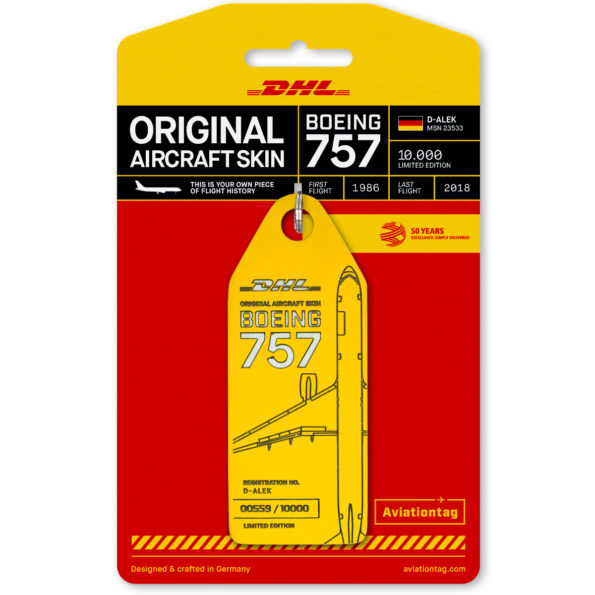 Keychain made of real aircraft skin: Boeing 757-200 DHL D-ALEK (Aviationtag 4260411671343)
€ 23.10
NL incl. VAT € 27.95
Reduced shipping charge may be applicable depending on country of destination and contents of shopping cart. Will be shown before checkout.Add to cart

This product was added to our database on Saturday 3 October 2020.

After the success of the joint DHL and Aviationtag D-ALEH edition, we are proud to be able to announce the next in line today: The Boeing 757-200F D-ALEK.

The Boeing 757-200 was handed over to British Airways in March 1986 in Renton / Washington with the MSN (manufacturer serial number) 23533 and line number 93 as a purely passenger aircraft. The British flag carrier registered it as G-BIKY, christening it "Leeds Castle".

Along with other aircraft, in 2003 the 757 was repurposed into a purely cargo aircraft in Mobile Downtown (Alabama), to then be used exclusively for DHL. In the course of this, it was re-assigned to European Air Transport with the registration OO-DPN and finally to EAT Leipzig in 2010.

Under its final registration D-ALEK, it flew DHL consignments around the world until 2018, before finally being parked in Castellon / Spain on Christmas Eve 2018.

After marking 50 years of DHL, Aviationtag is now launching a new joint limited edition of the D-ALEK for commercial sale. Not just a piece of aviation history, but also a piece of DHL history – get yours while stocks last!