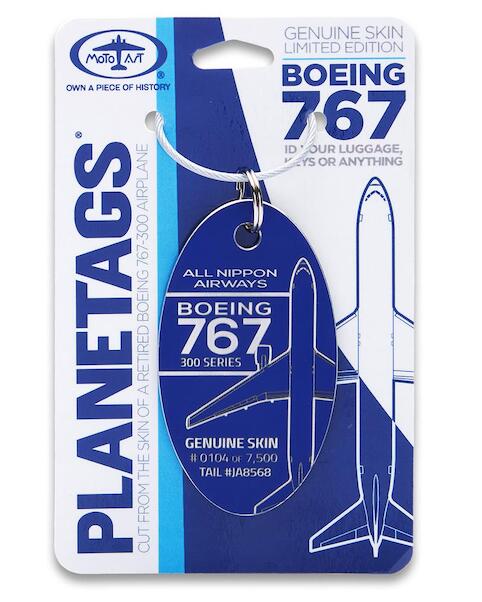 Keychain made of real aircraft skin: Boeing B767 ANA All Nippon Airways JA8568 (PlaneTags B767ANAPT)
€ 24.75
EU: incl. tax € 29.95
Reduced shipping charge may be applicable depending on country of destination and contents of shopping cart. Will be shown before checkout.Add to cart

This product was added to our database on Tuesday 10 March 2020.

ANA was founded in 1952, providing helicopter and transport services. By the end of 1953, they were authorized to operate charter and scheduled passenger service. Within 10 years of their start, they had carried 1 million passengers. By 1969, they had carried 5 million, steadily climbing to 45 million passengers by 2004. They rose from their small beginnings to now the largest airline in Japan, serving more than 42 million passengers annually. Their use of nearly only Boeing aircraft allowed them to grow and expand their routes from Japan only to international routes with the flexibility of interchangeable crew, parts, and maintenance. This near-exclusive use of Boeing during their biggest growth period prompted them to purchase 15 Boeing 767-300s in 1985 for $1.8 billion - the largest purchase by Japan of commercial aircraft from the U.S. JA8568 was part of this record-breaking purchase.

Our Boeing 767, JA8568, was delivered to ANA (All Nippon Airways) in September of 1993 where it flew exclusively, making rounds to major cities along high-density routes within Asia. Retired in November of 2018, JA8568 was stored at San Bernardino International Airport in California until December 2019, when it became part of the PlaneTags collection. Stripping the iconic two-tone blue skin right on the tarmac, transporting the pieces back to the studio, hand cutting, shaping, sanding, and laser etching each Tag has been a labor of love to honor this hardworking plane