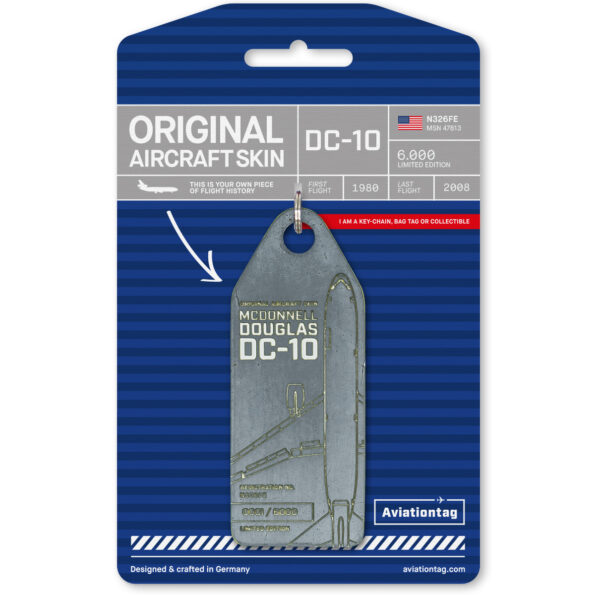 The McDonnell Douglas trijet DC-10-30 sporting manufacturer serial number (MSN) 47813 and line number 312 was built for the British airline Laker Airways and delivered to the United Kingdom on 24 March 1980 with registration G-BGXG.

The plane was to fly for the airline founded by Freddie Laker in 1966 for two years before returning to the United States. There it was registered as N1854U and became part of United Airlines on 21 September 1984, serving it faithfully for a total of 17 years – initially as a passenger plane and then as a freighter from September 1997.

From 23 March 2001, our McDonnell Douglas – now registered as N326FE – formed part of the Federal Express fleet. 2006 marked the end of the lease and the DC10-300 returned to United Airlines. In 2008, the leasing company Logistic Air took ownership of the N326FE, transferring it to Roswell. Since then it has been awaiting its next mission as an Aviationtag and we are thrilled to now welcome it into our Aviationtag family!

The N326FE has been parked in the desert for more than 13 years and the paint is very flaky. It can come off easily, especially at the edges. We cannot accept any complaints based on the condition of the paint. If you are uncomfortable with that, please chose a different edition.