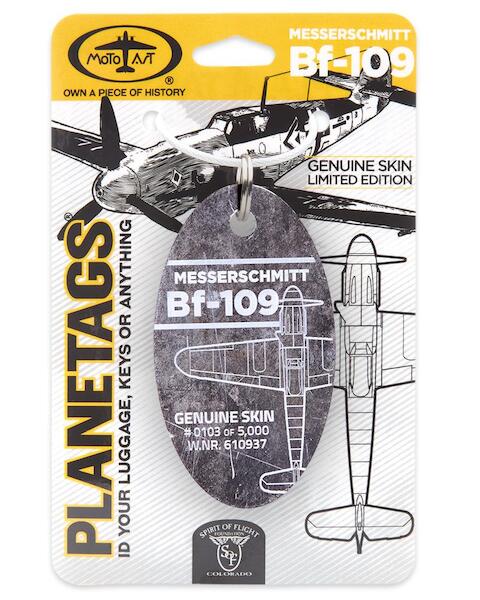 PRESERVE HISTORY WITH EVERY PURCHASE

The release of our first Messerschmitt PlaneTag offers something a little different – the chance for our aviation enthusiasts to assist in the restoration and preservation of aviation history. Proceeds from the sale of these authentic Bf 109 PlaneTags will be donated to the Spirit of Flight Foundation in support of their mission to restore the notorious Bf 109 Messerschmitt, Werk Nummer 10145, as well as their charitable work.

The 10145 was built in Leipzig, Germany in 1942, serving as a Norwegian patrol aircraft which flew the Murmansk sector of Russia. The aircraft was shot down in aerial combat with multiple Soviet fighters during an escort mission for Ju 88 bomber aircraft on July 19th, 1942. The aircraft was flown by FW. Leopold Knier, who bailed out at an altitude of about 3000 meters after it was crippled by the Soviet P-40. The aircraft remained in Northern Russia until it was rescued by Warbird Recovery in the winter of 1994, and is currently under restoration for the Spirit of Flight Foundation.

Our Bf 109G-10 / U4 Messerschmitt, Werk Nummer 610937 was built at the Erla Werke in Leipzig, Germany in 1944. Abandoned at Zeltweg airfield in Austria at the end of World War II, this plane went on to serve in the Bulgarian and Yugoslavian Air Forces into the 1950s. These PlaneTags are cut from the original wing panels which were removed during its restoration, and the fully restored plane is now on display at the American Heritage Museum.

"Some aviation enthusiasts have expressed concern that we're chopping up historic, display-worthy planes – but we're rescuing our aircraft and original parts from destructive desert and forest environments, where they would have just continued to degrade into nothing," says MotoArt owner Dave Hall. "With our new Messerschmitt PlaneTag, our customers have an opportunity to do something really special and have a hand in preserving aviation history – by helping renovate a truly historic plane for everyone to see and enjoy."
Our newest PlaneTags are numbered to 5,000 .

"The authentic, rustic look of this tag really stands out from other livery," says Hall.

"It's a must-have to add a new finish to your collection."