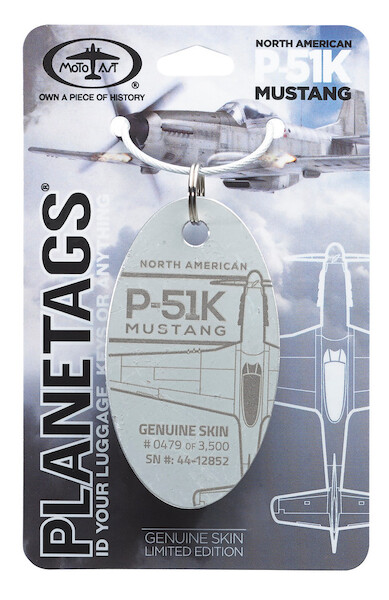 The authentic P-51 fuselage skins were removed during the restoration of 44-12852 and were used as patterns for the new skins to keep the aircraft flying over the years. We received these from Aero Trader in Chino, California, giving us the opportunity to add this historical authentic aircraft skin to our encyclopedia of aviation history.

Our P-51K "Natural" color is any piece of the aircraft skin that is the natural metal finish with a light even finish.

Produced by North American Aviation beginning in 1940, the P-51 Mustang is a long-range, single-engine fighter, which proved invaluable to the Allied Powers during World War II, the Korean War, and other conflicts. Boasting a powerful engine with mighty cannons, its superb handling, performance, firepower, and long-range capabilities proved to be invaluable in changing the course of the Wars. Like many WWII era warbirds, the story of 44-12852 did not end in 1945. After flying - and crashing - in the 1946 Cleveland National Air Races, she was taken apart, crudely reassembled as a trainer, changed identities, sold and resold many times over. Today, this mighty Mustang, now known as "Frenesi", soars through the skies, performing in air shows all over the world.

In the 1950s, she entered active military service again, flying with the Dominican Republic Air Force under Coronel Rafael Diaz Bonilla - known as "El Diablo Rojo" (The Red Devil).  Known then as FAD 1900, she was part of the last squadron of combat ready Mustangs in the world.