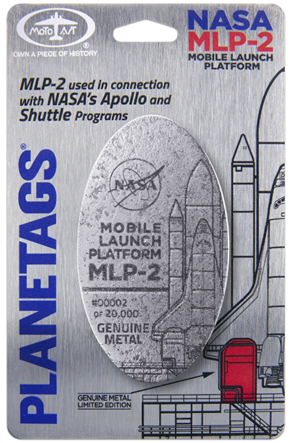 This product was added to our database on Friday 24 September 2021.

NASA's Mobile Launchers were initially developed in 1963 to support the Apollo program, then later modified for the Space Shuttle program and rechristened Mobile Launch Platforms (MLP). These massive two-story structures supported Saturn V rockets, and later the Space Shuttle stack during the build-up and launch stages. The 6 million pound structure could support an additional 12 million pounds during assembly before being transported to launch complex 39. Once positioned, the MLP served as the actual launch platform.

The Tail Service Masts (TSM) were two large structures on both sides of the Shuttle main engine exhaust hole. The TSMs provided umbilical connections to the shuttle orbiter, feeding propellants from the launch pad tanks, as well as helium and nitrogen, purge air, electrical power, and comm links. The umbilicals rapidly retracted into the TSM at launch and were protected from the flames by trap blast doors. The TSMs were literally the last thing to touch the Space Shuttle before its ascension.

As Mobile Launcher-2 (ML-2) it launched the uncrewed Apollo 6 mission, followed by the crewed 9th, 12th, and 14th missions, and finally Skylab aboard a Saturn V in 1973. Read more about it on our blog. MotoArt is honored to have the opportunity to preserve this historic space exploration artifact and create the incredible MLP-2 PlaneTag. These are our thickest PlaneTags yet - ˝ inch thick hardened steel, waterjet cut and laser etched, and attached to an aluminum display card with a magnet. This collectible will be cherished for generations to come. The MLP never left earth but our NASA MLP-2 PlaneTags are out of this world. Get yours now.