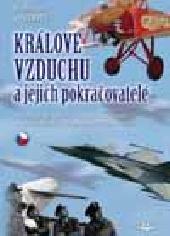 This product was added to our database on Tuesday 7 September 2010.

More than 90 year-old history of the czech Air Force is inextricably linked with his presentations to the public at air shows. Author describes the glorious, almost eighty-year history of MS. aerobatic school.
Air Kings were the demo pilots of the day.
Begins with a pre-war era aerobatics associated with the names of Staff Captain and Lieutenant Francis Malkovskťho, our king of the air and other pre-war air acrobats. For the post WW2 generations the name Joseph Flekal, Karel Frantisek Perina Mail become an attraction, guaranteeing an unforgettable experience for their exhibitions. Their glory ended in February 1948. Staff Captain Joseph Flekal, Charles Post and Frantisek Perina was simply "locking" over forty years and had to wait for the return of honor.
A follow-up period after 1951, taking jet aircraft technology from the S-101 (MiG15), but mainly the powerful presentation of "patnŠctek. Are mentioned by individuals who have performed acrobatics on the MiG 15, described all the acrobatic group for each Airborne Division, led by Lt-Col. Pupae, col. Stone ("Seven"), col. Possible ("nine") are mentioned all the Saaz group. Continues showing the MiG 19 and MiG 21 (individual and group), "Smaěilova Group Su-7, a group from Kosice to L-29 L-39 and also described the air show with Flowers in 1990.
Political changes in 1989, reflected in the presentation of the Air Force. Under the new conditions, the pilots could Vaclav Vasek, Alois Hackel, Hlavnicka Franz Josef Hlava, Jan and Bohumil Trojan Buda participate in Faiford IAT '91. Follows through "Display Team" and a long series of large air days, with international participation, known CIAF. Until then come a series continues the tradition king air Malkovskťho, Novak and others have similarly joined many pilots - Vaclav Vasek, Frantisek Hlavnicka, Emperor Franz Josef Miler, Francis Tabacko, Vitezslav Nohel and many others. Amongst these groups of "Hinds", "BOX" and "HINDS" helicopters Mi-24 "RAINBOW" the Su-22, "Szob quartet" on the L-410T in the "Display Team Army".
The last part is devoted to today - including the operation of pilot demonstration of conscripts from the Army bases Prerov, Square, and the celebration of CŠslav inc. 2009.
The book incorporates a great amount of authentic photographs from all periods. Of contributions and memories actors themselves best illustrated by the atmosphere between somersaults in our sky. "