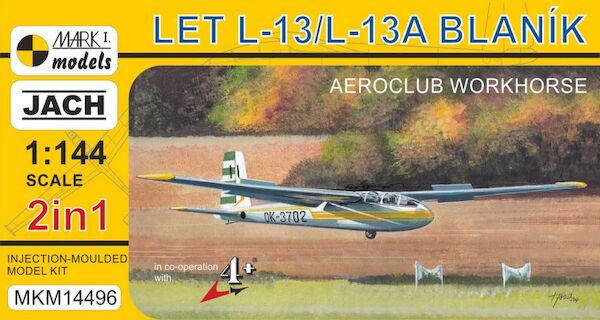 The L-13 Blaník is a two-seater glider produced by the Czechoslovak company Let Kunovice. Designed at the VZLÚ Aeronautical Research and Test Establishment in Prague in 1954-56, its prototype first flew in March 1956. It is an all-metal monoplane, with the fuselage of a semi-monocoque construction and high set wings with characteristic forward sweep. Its cockpit is enclosed by a two-piece acrylic glass canopy. The flaps and control surfaces are fabric covered and the fuselage is provided with a single-wheel semi-retractable landing gear and a fixed tail skid.
The L-13 entered production in 1958 and quickly gained popularity as an inexpensive and durable type, which was easy to fly and operate. It was widely adopted in the former Eastern Bloc countries and was also exported in large numbers to Western Europe, North and South America. In total, more than 2600 Blaník gliders had been produced by 1978, while a small batch of a modernised L-13A variant was built in 1981-82. It became the most numerous and widely used trainer glider in the world.

Two injection-moulded kits are supplied in this box and each kit contains 13 parts and one clear part (the cockpit canopy). Two large decal sheets are included.