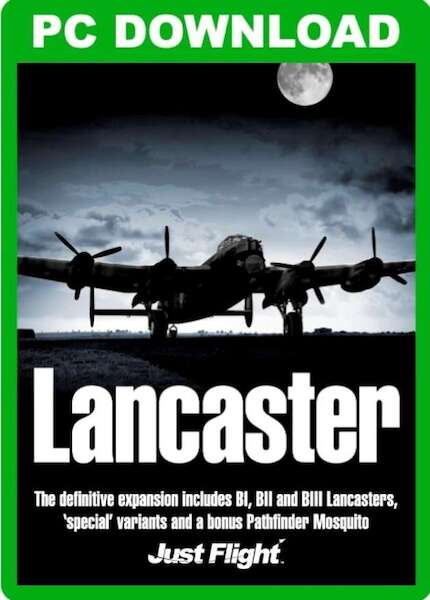 Product description
Lancaster is supplied in a variety of variants and liveries and all come with detailed crew stations that you can select to fly the aircraft from; historic scenery of some of the more notable locations that the Lancaster is associated with is also included. As a fantastic bonus a fully featured de Havilland Mosquito is included for your reconnaissance/Pathfinder flights.

This simulation illustrates life aboard Bomber Command's most famous bomber. Whilst it is impossible to re-create the experience of the real thing, Lancaster is the most accurate and evocative simulation of a Lancaster on 'ops'. Many new special effects have been created to add to the excitement and realism whether you choose to fly as pilot, navigator, radio operator/gunner or bomb-aimer.

The Avro Lancaster is probably the most iconic heavy bomber of WWII and rates alongside the Spitfire as one of the most recognised. The supreme combat aircraft designers at Aeroplane Heaven have carefully crafted this aircraft with due respect and memory to the tireless crews who flew in them.

Please note that the weapons will not destroy any objects as the Lancaster product is hosted in Flight Simulator 2004 which does not have this function.