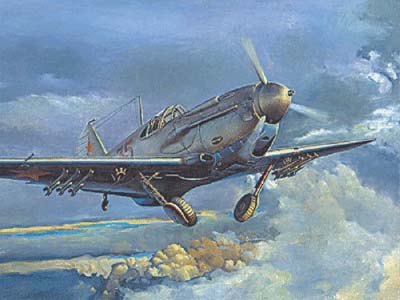 Ex Toko
In the spring of 1940, a group of designers directed by S.Lavochkin, V.Gorbunov and M.Gudkov proposed a new experimental fighter to be built for test flight - the "I-301". As a result of shortages concerning metallic materials, basic construction was made using "delta-wood", or wood soaked in special phenolic resins. The aircraft was powered by a 1050h.p. M105P liquid-cooled engine enabling it to reach speeds of 605 km/h - it was faster than a modified "Me-109", Germany's main fighter.
Production of the new plane, named the LaGG-1, was started just before the end of flight testing, the plane's construction being developed in time for production to proceed serially.
Additional fuel tanks were installed in the replacement wing sections. This modification gave longer range and was named the LaGG-3, and five aircraft factories started production of this type.
Planes of series 1,5, and 11 had increased armament; two UBS heavy machine guns, RS-82 rockets (eight for 5 series and six for the 11 series) and bombs. The take-off weight of the production planes increased, and speed was reduced to 535 km/h, range was also reduced.
In spite of being produced in great numbers, the Lagg-3's performance was worse than other Soviet fighter's. That's the reason why the aircraft had been in constant development during its production and service. More than 6500 planes of all types were built in total.