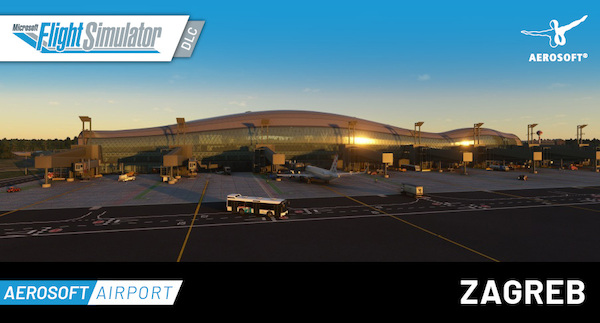 This product was added to our database on Saturday 8 May 2021.

The Aerosoft Airport Zagreb DLC comes with all detailed 3D modeled and PBR as well as normal textured terminals, airport buildings and facilities including the complete military area of LDZA. Immerse yourself in this place that fits seamlessly into the MSFS environment with custom orthophoto maps that show the current situation on the ground.

Lots of little details around the airport are animated, e.g., the windsocks, air and ground radar antennas and custom jetways. Near the airport there is an old wooden chapel of the Wounded Jesus from 1758 and renovated in 1896. In the distance, you can spot the TV tower on the hill Sljeme and the ruins of the medieval fortified town Medvedgrad.

All the parking codes, navaids, ground marking, and taxiway layouts are based on recent charts. The slope of the runway was made according to the airport technical documentation.

Features:
Franjo Tu?man Airport" (LDZA) with all the buildings and service facilities, translucent detailed new terminal buildings with interior designs. Complete military area with hangars and buildings. TV tower "Sljeme" and old ruins of "Medvedgrad" are included
A custom orthophoto that covers altered parts of the original Bing satellite image
Terraforming with correct elevation of the entire airport and its surroundings adapted to the elevation of the surrounding terrain according to MSFS
The actual slope of the runway according to the technical documentation of the airport
Slight slopes of the apron towards the drainage channels
Detailed ground markings based on recent charts of parking stands and new taxiway layouts including recent changes of taxiway layout
AFCAD with correct GATE and Parking positions and a functional animated custom Jetway with each GATE
Custom animated windsocks
Animated radar antenna
RNW Edge, Approach lights and PAPI custom model
Custom taxiway signage
Realistic night time dynamic lighting
complete PBR + normal texturing of all objects and ground
Most models and textures based on photos taken at the airport
Static aircraft and vehicles
Custom Catering Truck and Boarding Stairs
Customized airport services according to the type of parking position
Realistic navigational aids (ILS, VOR/DME, NDB, ATIS). AFD optimized, frequencies and approaches adapted based on recent charts