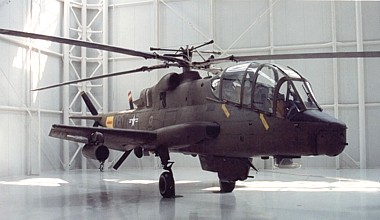 This product was added to our database on Wednesday 12 August 2009.

In 1965, with the growing involvement in Vietnam, the U.S. Army requested proposals for an Advanced Aerial Fire Support System (AAFSS) program intended to establish a technologically advanced attack helicopter. Preliminary designs were submitted by Lockheed and Sikorsky. In 1966, Lockheed's design, AH-56 Cheyenne was selected as the winner. An engineering development and 375 production contract was signed. The first prototype first flew in 1967 and reached speeds of over 240 mph. It was judged as highly agile and a very capable weapon system. However, the development of new technologies on the AH-56 led to many cost and time overruns, and the arrival of two other viable alternatives, Bell's AH-1G Cobra and Sikorsky's S-67 Blackhawk forced the entire program to be effectively cancelled in 1972. At the end, the Army realized it had needed a less complicated combat system with the agility of a light helicopter. The integrated fire control and navigation systems would also have to be of the low-maintenance variety, leading up to the designation of the new Advanced Attack Helicopter (AAH) initiative.