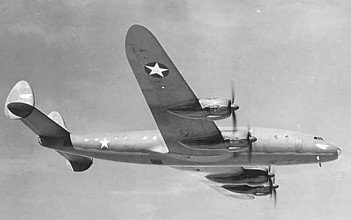 This product was added to our database on Thursday 15 March 2012.

In December 1942, following the United States entered World War II, the production lines at the Lockheed were taken over by the U.S. government for the war effort. Along with the assembly lines of the L-049 Constellation airliner that ordered by Trans World and Pam American Airlines, were also requisitioned and was redesignated C-69. Before the C-69 production entered military service, one prototype XC-69 was made and rolled out in December 1942. The first flight was made a month later. The C-69 was claimed that it was able to attain a larger maximum speed than the Japanese Mitsubishi A6M Zero fighter. Unfortunately, the C-69 was not declared a priority. Lockheed continued to focus on building combat aircraft while the C-54 Skymaster, the C-69's competitor was already flying and officially ordered. It became less important to the war effort since the tide of the war had turned in favor of the U.S. Only a small number of C-69 aircraft would see service in the last year of the war. At the end of the war, only 22 C-69s were produced. Most of the C-69s were sold on the civilian market between 1946 and 1947.