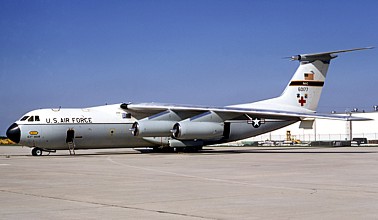 In 1959, the U.S.A.F. issued a requirement for a jet powered, fast and strategic transport aircraft that would serve as a "work horse" for rapidly moving U.S. Army troops anywhere in the world. Lockheed responded to the requirement with the Model 300 and was received contract for five test-aircrafts to be designated C-141. Although operational testing continue, the Air Force needs due the involvement in South Vietnam soon had production aircraft C-141A involved in operational sorties to the combat zone. In 1965, the first operational C-141A delivery to units of the MATS. Soon the C-141A made flights almost daily to Southeast Asia. In January 1973, the Paris Peace Accords called for a ceasefire along with the withdrawal of US force in South Vietnam and the repatriation of prisoners of war held in North Vietnam. A C-141 66-0177 transported the first group of repatriated POWs from Hanoi to Clark AB, Philippines, so it was picked up nickname Hanoi Taxi. In 1979 MAC initiated a cargo capacity upgrade program for its C-141A fleet. The project added an inflight refueling system and lengthened the fuselage. The stretched C-141A was designated C-141B.