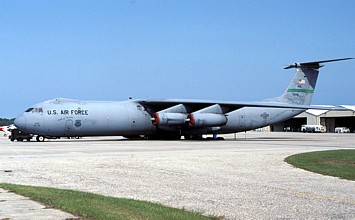 In 1959, the U.S.A.F. issued a requirement for a jet powered, fast and strategic transport aircraft that would serve as a "work horse" for rapidly moving U.S. Army troops anywhere in the world. Lockheed responded to the requirement with the Model 300 and was received contract for the aircrafts to be designated C-141A. In practice, MAC found that the C-141A's cargo hold volume was small compared to its weight-lifting capability. In 1979 U.S.A.F. initiated a cargo capacity upgrade program for its C-141A fleet. The project added an inflight refueling system and lengthened the fuselage. The stretched C-141A was designated C-141B. The first YC-141B conversion performed its initial flight and was accepted. A total of 270 C-141B conversions were performed through June 1982. The Air Force was very pleased with the conversion program, since it came through ahead of schedule and under budget, and gave MAC an increased airlift capacity equivalent to 90 more C-141As. After the Gulf War, structural problems led to the imposition of flight restrictions, 63 C-141B were resolved by a comprehensive repair program and were also upgraded to the C-141C.