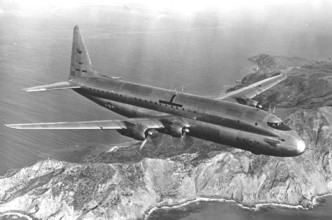 This product was added to our database on Monday 20 february 2012.

In 1942, the U.S. Navy called for a large transport aircraft to improve upon the navy's fleet of flying boats. In the meantime, Lockheed and PanAm began a Model 189 airliner study as a greater / double-decker version of the 049 Constellation. A year later in 1943, the Navy involved the development and ordered two prototypes. It was given designation XR6O-1 Constitution. Since the XR6O-1 was a low-priority project, the first prototype was completed after the war ended in 1945. The first flight took place in late 1946. It was found to be significantly underpowered. In 1949, the second R6O was commissioned into service at the logistics support squadron VR-44. Soon joined by the first R6O, the two R6Os reassigned to VR-5 for personnel and material transport, and were redesignated R6V-1. The R6V-1 had operational difficulties which prevented it from meeting its original design objectives. The four Pratt & Whitney R-4360s did not offer the power needed by such a large aircraft. With a total of 3,760 flight hours between the two aircrafts, in 1953 the R6V Constitutions were retired and placed in storage at NAF Lichtfield Park, Arizona.