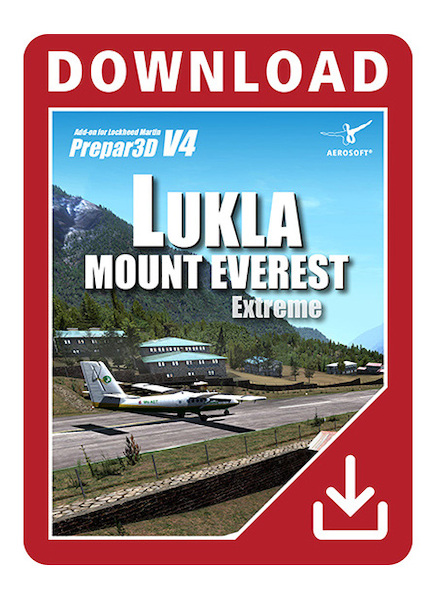 This product was added to our database on Wednesday 27 May 2020.

Product information:
"Gateway to Mount Everest" and "World's Most Dangerous Airport" are certainly the most commonly used attributes for Lukla – an airport that seems out of this world.

There are airports that are higher (see Tingri included in this add-on). There may be airports that have a shorter runway or an even worse upwards slope of the runway. Others have a mountain wall at the end of its runway. What makes Lukla standing out is its combination of all those factors in one single airport!

Not enough thrill for you? Count in weather as a factor. No navigational aids. Limited documentation of approach and takeoff routes. An uncontrolled airpace with fixed wing aircraft and helicopters.

Bring your engines (and brakes!) to their limits by heading up the valley to Syangboche, a bumpy airstrip located even higher and surrounded by rocks high above a steep valley. Or try to find a helicopter that can reach helipads at these altitudes or even land at the Mount Everest basecamp, located right next to sharp glacier pinnacles between rock outcrops.

This package is a successor to "Lukla X – Mount Everest", one of our most popular sceneries of the past decade that has won many awards – among them the Simflight Award. This new version is a completely new development setting the bar even higher, coming with much more content than the previous version.

CON: Not a single airport with a flat runway.