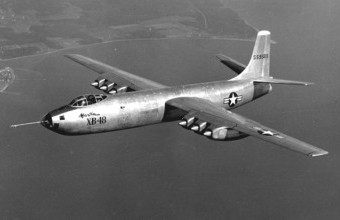 This product was added to our database on Tuesday 28 july 2009.

In 1944, with the success of the German jet bomber Ar.234, USAAF was aware of enemy aviation advances. The war department issued requirement for a new design of the jet bomber which powered either by J35 or J47 engines. The Martin company submitted the Model 223. It was awarded contract for two prototypes which designated XB-48. Other designs in the competition included the North American XB-45, the Convair XB-46 and the Boeing XB-47. In 1946, USAAF needed a jet-bomber in service urgently, and chose the flight-tested B-45 as the winner. The XB-47 and XB-48 were deferred until they had tested. The first XB-48 made its maiden flights in 1947 but engine difficulties delayed development and testing. In 1948, the XB-48 lost to the Boeing XB-47 in a fly-off as the XB-47 with its swept wing had much better performance. Martin attempted to convert the second XB-48 with four turboprop engines but was rejected by the Air Force. Flight tests of the XB-48s continued until the end of the program in fall of 1949.