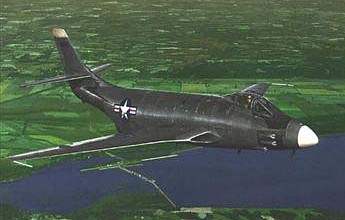 n 1945, USAAF recognized all the early jet fighters lacked sufficient range to escort bombers to the target. So proposals for a penetration fighter were requested. In 1947, McDonnell submitted its larger-sized F2H proposal, and was chosen for two prototypes, designated XF-88 Voodoo. The other designs entered the competition were the Lockheed XF-90 and the North American YF-93A. In 1948, the XF-88 made its first flight. Handling was acceptable but the speed was disappointing. So the second prototype was modified with two afterburning turbojets, and was redesignated XF-88A. The XF-88A reached higher speeds, but still not fast enough. In June 1950, after a fly-off with the XF-90 and YF-93, USAF chose the XF-88A as the winner of the contest. However, no production order was justified at the time because of the outbreak of the Korean War. At the warˇ¦s conclusion, USAF still required a modern escort fighter. McDonnell was asked to develop an advanced design based on the XF-88. Two prototypes were ordered that became the F-101 with the same name of Voodoo.