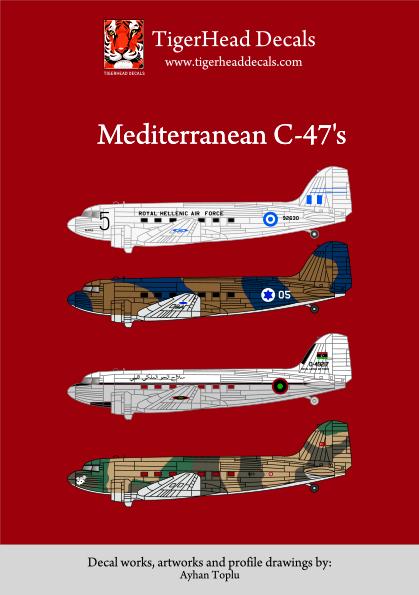 Mediteranean C47's (Israel, Greece, Lybia, Turkish AF) (Tigerhead Decals 72006)
€ 9.05
EU: incl. tax € 10.95
Reduced shipping charge may be applicable depending on country of destination and contents of shopping cart. Will be shown before checkout.

110 C-47A/Bs and DC-3s served the Turkish Armed Forces and the Turkish Air Force. But it was the Turkish State Airlines who was the first to buy 30 C-47s from the RAFME stocks in Cairo in 1945 in order to renew the fleet and to expand the existing routes. This was followed by the procurement of 18 C-47As with the sources allocated from the national budget in 1946. They joined The Turkish Armed Forces in 1948. It was soon followed by 81 C-47A/Bs supplied from the USAF stocks in Germany within the American Military Aid Programme, The shipment started in August 13, 1948 and it was completed in April 24, 1949. But 7 of these planes which arrived in 1949 were then delivered to an unknown destination most probably to Persia within the same year(1). The last C-47s added to the inventory were 11 planes 2 of which were acquired from Libya, one from the Turkish Airport Authorithies (DHMI) and one from the Turkish Mineral Exploration Agency (MTA) one from USAFE and 6 from THY (Turkish Airlines) which were used as VIP transports. The planes which were acquired from USAFE and THY were given the Turkish Military Serials which were previously assigned to those 7 planes delivered to an unknown destination(1).

C-47s served in the TuAF for a long period of time and they often worked side by side with C-130s and with C-160s. They flew the "Western Courier" and the "Eastern Courier" routines starting from the Etimesgut Military Airport. They were started to be replaced by the CASA CN-235s in Dec. 1993. Three EC-47s which were converted into ECM planes remained in service until 1995. The last C-47 was replaced in 1998.