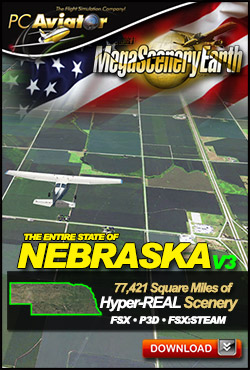 This product was added to our database on Tuesday 9 January 2018.

Fly the entire state - BORDER to BORDER - of Nebraska in photoreal detail. Nebraska is a MASSIVE 77,421 square miles in size and has 272 airports. You'll see everything that you see in Nebraska in real life in the scenery.

As an added bonus, we now provide all the VFR and IFR charts in digital PDF format to enable you to get the most out of your scenery. This includes two Sectionals, three IFR enroute charts, and a 325 page book of Instrument Approach plates, Airport Diagrams, SIDs and STARs, and an Airport Facility Directory. The charts are downloadable along with your scenery files. Some of the cities and landmarks you'll get to enjoy as you explore Nebraska include:

Discover the rest of it all for yourself! There's a LOT to see!