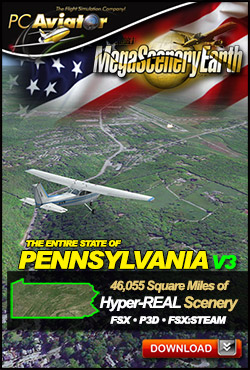 This product was added to our database on Tuesday 9 January 2018.

The New MegaSceneryEarth Pennsylvania V3 featuring unsurpassed image sharpness, scenery color and clarity, improved scenery features with accurate additional water bodies and topographical data and the latest aerial imagery available taken in 2015. Cruising the skies above Pennsylvania is a pilot's dream come true - from the point of view of a flying challenge to an eye candy feast. Over 46,055 square miles of scenery varying from flatlands and farmlands to "strangely" formed striations that make the Ridge and Valley Appalachians which make for an amazing visual experience that this scenery captures every bit of. There's over 120 state parks and national forests which make for some rugged remote bush flying or you can have some fun following larger rivers at low altitude such as the Susqehanna and the Allegheny. As well as cruising above the spectacular terrain, you get to fly into some well known cities such as Philadelphia and Pittsburgh. There are over 511 airports for you to use as landing and departure points as you enjoy the scenery. The large size of this state enables you to enjoy flights of up to 350 miles from border to border. There's many, many hours of flying to be done as you enjoy the eye candy of Pennsylvania Some of the cities and landmarks you'll get to enjoy as you explore Pennsylvania include: Cities: Philadelphia (largest), Pittsburgh, Allentown, Erie, , Reading, Scranton, Bethlehem, Lancaster, Levittown, Harrisburg (capital) Lakes: Lake Erie, Raystown, Pymatuning, Allegheny, Wallenpaupack, Beltzville, Nockamixon, Green Lane, Marburg, Long Arm, Youghiogheny, Arthur Mountains: Negro Mountain (3,209 ft), Mt Davis (3,205 ft), Baughman Rocks (3,153 ft), Blue Knob (3,127 ft), Glade Mountain (3,071 ft), Herman Point (3,018 ft) and a total of 50 mountains above 2,500 feet. State Parks: Bucktail, Cook Forest, French Creek, Laurel Ridge, Moraine, Ohiopyle, Pymatuning, Ricketts Glen, amongst many others. There's 120 in total for you to see from your cockpit. Major Rivers: Ohio, Delaware, Monongahela, Allegheny, Susquehanna, Lehigh. Some Other Major Landmarks & Highlights: Amish Country, Gettysburg, Lake Erie, Allegheny & Appalachian Mountains and just too much of everything else to mention. Discover the rest of it all for yourself! There's a LOT to see!