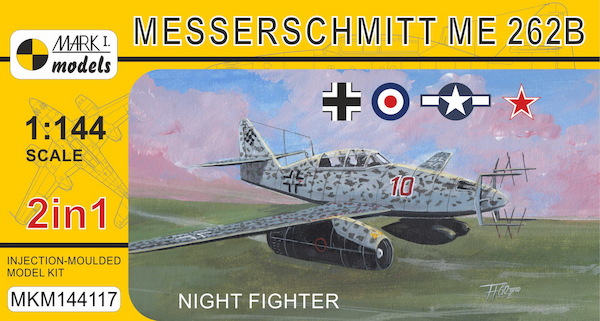 The Me 262 Schwalbe was a German jet fighter designed by the team led by Willy Messerschmitt. It was one of the most advanced warplanes to see front-line service during WWII. Its protracted development began in 1939, but aerodynamics research work and jet engine development delayed its mass production.

The two-seat aircraft based on the Me 262A-series was conceived in August 1943, but its prototype, a Blohm und Voss-converted  Me 262 S5 was first flown only in July 1944.

In total, some 29 Me 262Bs were modified, with the conversions shared between B&V and DLH. The Me 262B-1a/U1 night-fighters were all modifications, either from already-adapted B-1a trainer aircraft or directly from Me 262A airframes.

The Me 262B was an all-metal low-wing monoplane, of a streamlined design and with two cockpits in tandem. It was powered by two Jumo 004 turbojets suspended under the wings. It was fitted with a swept-back wing and a tricycle landing gear. It had a long clear-view canopy and was fitted with a non-ejection seats. Carriage of the four MK 108 cannons in the nose was intended for all the night-fighters; however, one of the NJG 11-operated Me 262B-1a/U1 had its lower two MK 108 cannons replaced by a pair of MG 151/20 guns. Due to revised fuel tankage the Me 262B-1a/U1 carried two pylons with external fuel tanks under the front fuselage.

A number of Me 262s fell into Allied hands and some were examined in Britain, the USSR and the USA post-war.