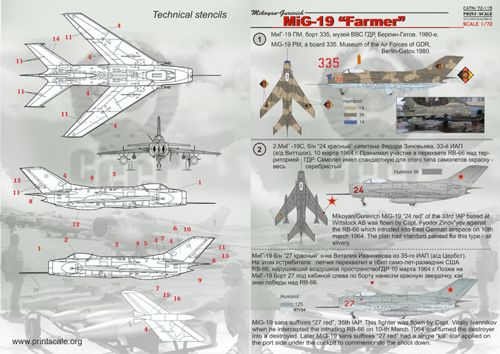 2. Mikoyan/Gurevich MiG-19 "24 red" of the 33rd IAP based at Wittstock AB was flown by Capt. Fyodor Zinov"yev against the RB-66 which intruded into East German airspace on 10th march 1964. The plan had standard painted for this type - all silvery.

3. A two tone Gray camouflaged F-6, 19 Squadron, Pakistani Air Force. The aircraft is a late production F-6 with Pakistani modifications including the deletion of the antenna mast under the cockpit and the addition of AIM-9 Sidewinder rails on the outboard wing panels.

4. Bangladeshi F-6, Black 7104. Is armed with seven shot rocket pod and two 200 gallon (760 liter) underwing fuel tanks. It is a late production F-6 with the bullet shaped braking parachute container at the base of the rudder and N-30 cannons without gun gas defectors on the muzzles.