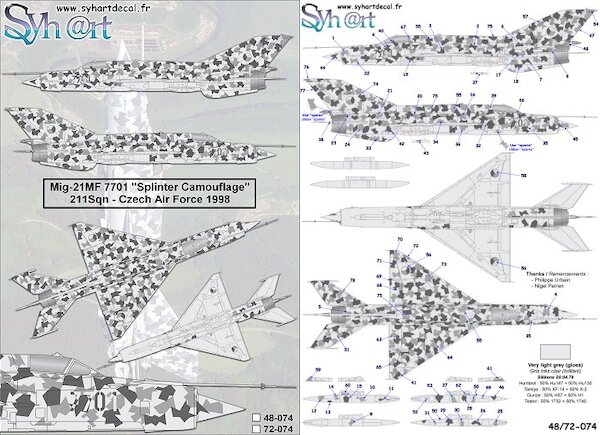 Mikoyan MiG21MF Fishbed (7701 211sq Czech AF 1988 Splinter Camouflage) (Syhart Decal 72-074)
€ 6.57
EU: incl. tax € 7.95
Reduced shipping charge may be applicable depending on country of destination and contents of shopping cart. Will be shown before checkout.Add to cart

To join the NATO at the end of the 90s, the Czech Air Force was asked to adapt the standards of camouflages of their combat aircraft.
The NATO standards for in particular air superiority fighters was mainly based on various tones of grey. Several proposals were tested like this original "Splinter" version painted in three tones of grey, applied to Mig-21MF 7701 from 1998. The proposal of "Splinter" camouflage was declined for the benefit of a camouflage in two tones of grey, while of numerous Mig-21 kept their natural metal schemes up to their retirement in 2005.
Note that this aircraft flown before by the LZO squadron, known for the flight test and demonstration "Stress Team" flying on various versions of Mig-21, including the 7701. (The LZO Squadron was retired after a crash of two aircraft.)