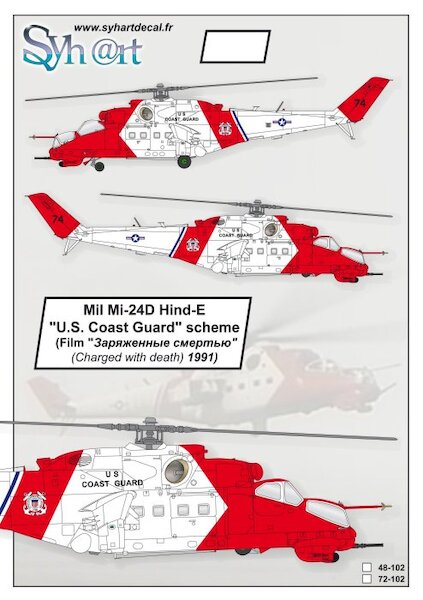 Mil Mi24V Hind-E ''U.S. Coast Guard'' from Russian film "Charged with death" (Syhart Decal 48-102)
€ 7.40
EU: incl. tax € 8.95
Reduced shipping charge may be applicable depending on country of destination and contents of shopping cart. Will be shown before checkout.Add to cart

This Mi-24 was painted in U.S Coast Guard scheme to fulfill the role of an American Search and Rescue (SAR) helicopter in the Russian film "Charged with Death" (Zarjazhennye smert'ju), It appeared as such some time after filming during public days.

In 1991, as the Soviet Union crumbled, relations with the United States improved. It is in this context that the film "Charged with Death" came out in Russia. The scenario tells the story of traffickers hunted by the Russian Navy, in collaboration with the US Coast Guard.

If it happens that western aircraft wear of the communist or middle-east block style schemes, such as the "Aggressors" of the Naval Fighter Weapons School (Top Gun) in the US Navy, or the US Air Force's "Aggressor Squadrons."
It is much less common to see Russian aircrafts in American colors, especially when it's a Mil Mi-24 (attack helicopter) which plays the role of a rescue helicopter.

However, it should be noted that the decoration of the "U.S Coast Guard" type which has been applied to it respects the original scheme in the smallest detail, notably the faithful insignia of the U.S Coast Guard.
The only breach would be the bands bordering the American star which are a little too long, this detail is obviously included in the decals.
Please note: picture shos bot 1/48 and 1/72 scale decals as they are almost identical. Of course only the apropriate scale declas are included