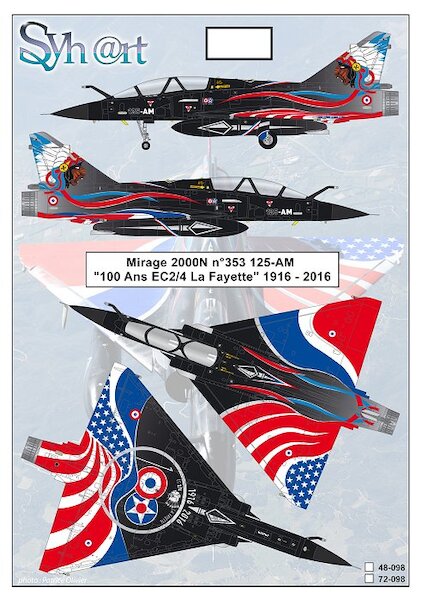 This product was added to our database on Monday 19 December 2016.

The squadron "La Fayette" was born in 1916 to welcome the American volunteer pilots, eager to lend their support to France during the conflict of the First World War. It is thus named in honor of the Marquis de La Fayette, French hero of the United States Independence. At the end of the conflict the squadron was retired, with a total of 199 confirmed victories.

On the same time, in 2007 a team of two Mirage 2000N from the squadron EC3/4 "Limousin", based in Istres, presents an impressive tactical demonstration on Airshows in France and Europe. Named "RAMEX DELTA", the team became one of the French Air Force ambassadors, alongside of the Patrouille de France, Cartouches dorées, Rafale Solo...
In 2011 when the EC3 / 4 "Limousin" was retired, The "RAMEX DELTA" continue the shows with the squadron EC2/4 "La Fayette" until July 2016.

It is indeed in 2016, when the EC 2/4 "La Fayette" celebrates Centenary and its next conversion on Rafale, that the famous team "Ramex Delta" completes its last season.
Steering wheel particularly on the Mirage 2000N nḞ353 specially painted for the 100th anniversary of the "La Fayette".