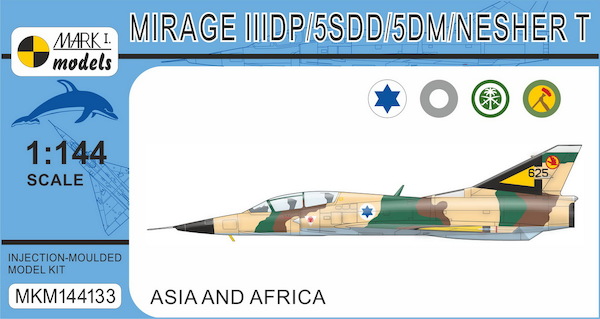 This product was added to our database on Thursday 14 April 2022.

The Mirage III jet fighter was developed by the French Avions Marcel Dassault company and its prototype flew in 1956. Regarded as a versatile second-generation fighter, it was the first Western European aircraft to exceed Mach 2 in level flight.

The two-seat Mirage IIID was a trainer version of the upgraded Mirage IIIE destined for export, while the Mirage 5D trainers stemmed from the Mirage 5 ground-attack variants; 55 of the former and 60 of the latter were produced. The Nesher T was an Israeli IAI-built derivative based on the Mirage IIIB airframe and fitted with simplified avionics; 10 a/c were produced and delivered during 1971-72.

The Mirage IIID/5D/Nesher T was a two-seat, all-metal monoplane featuring a tailless delta configuration. Compared to the single seater, the fuselage was stretched to accommodate the second seat while the fuselage cannons and radar were removed. It was fitted with ejection seats placed under one-piece clear-view canopy and powered by a SNECMA Atar 09C turbojet. If desired, external stores pylons and armament could be carried: two inner underwing pylons were designed for fuel drop tanks and the two outboard ones could carry Sidewinder or Matra Magic missiles.

Outside Europe, the two-seat Mirages were delivered to number of countries in South America, Africa and the Middle East, including Israel, Pakistan, Egypt (via Saudi Arabia)

This injection-moulded kit contains 46 parts and two clear parts (the cockpit canopy and a landing/taxiing lamp). A comprehensive decal sheet is included.