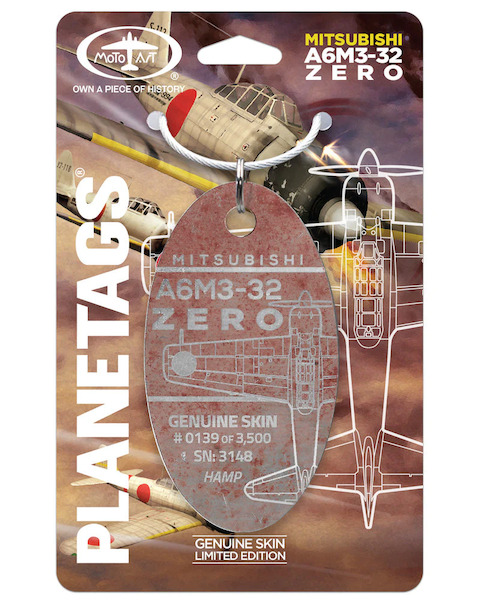 Finding a Mitsubishi A6M3 Zero, one of the most iconic aircraft of World War II, is near impossible in 2022. With only 343 made of this variant, and so many lost to war and to the elements where they landed, or by scrapping, it was nothing short of a miracle to find one. Introducing Mitsubishi A6M3 Model 32 Zero PlaneTags by MotoArt.

The Mitsubishi A6M was a long range, carrier capable fighter flown by the Imperial Japanese Navy Air Service from 1940 to 1945. Designated as the Mitsubishi Navy Type 0 carrier fighter, and referred to as the Reisen (zero fighter) by its pilots, the Zero first flew in 1939 and entered service in 1940. They were designed from a 1937 Navy requirement for a fast, maneuverable long range fighter, and 10,815 were produced. The Zero became a symbol of Japanese air power during the first half of World War II. Our Zero, # 3148, was born in the height of World War II, with funds gifted from the school children of the Middle Schools of Manchuria. It was delivered to the Imperial Japanese Navy Air Service in 1942 and was assigned to the 252nd Kokutai (Navy Air Group) in the Marshall Islands airfield Taroa. History puts 3148 right in the middle of a storied battle for the Japanese-held island of Nauru in 1943, when USAAF Lt. Louis Zamperini's B-24D was shot at and badly damaged by a group of Zeros. 3148 was, by his own recollection, almost certainly flown by Miyazaki Isamu, an IJNAF ace pilot who fought in most of the South Pacific theaters. However, it was damaged beyond repair, not by combat but by bomb splinters after Taroa was bombed by F6F Hellcats.

3148, along with several other Zeros, was intended for restoration by the man who found them on Taroa, John Sterling. After passing through several hands, 3148 ended up with Legend Flyers, who have carefully researched and restored her in authentic colors and back up on her own legs for the first time in over 70 years. The MotoArt team was honored when Legend Flyers asked them to tag the unusable material from the restoration. Add a Mitsubishi A6M3 Zero PlaneTag to your collection today. The limited edition Japanese Zero PlaneTags will be taking off at lightning speed so don't miss out.