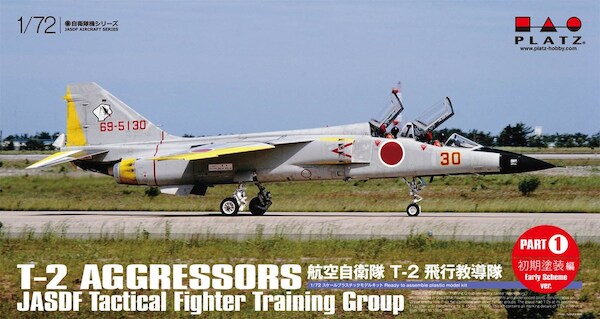 This product was added to our database on Tuesday 5 March 2019.

State of the art kit.

The T-2 was a first jet trainer aircraft used by the Japan Air Self-Defense Force (JASDF). The development of T-2 was started in 1967 and it went into the mass production in 1975. The T-2 had been used for the fighter pilot training until 2004.
Among the fighter troops of the JASDF , the Tactical Fighter Training Group (generally called "Aggressors") is especially popular. The JASDF Tactical Fighter Training Group was founded in Dec.1981, having designated equipment and experienced pilots, with the main duty of air battle training with each fighter unit. Originally, domestically produced supersonic training machine T-2 was deployed, and a total of 11 aircraft were operated before turning over to F-15 DJs in 1990. Those T-2s carrying unique markings and paintings look quite attractive and have high popularity among aviation fans.

About the painting and marking of T-2 Aggressors

A total of 11 T-2 Aggressors were subjected to various paintings and markings different from ordinary T-2 practice aircraft due to the character of the mission of virtual enemy aircraft role.
It was the same Light Gull Grey paint as the usual T-2 late model, but since 1984 it had base body color but changed the aircraft number marking color or added false canopy painting and so on.
Furthermore, a part of aircrafts were also given [Trim Painting] to make it like another aircraft. Since around 1985, it began to overspray Gray-based Air Camouflage over the entire fuselage, and various types of camouflage paintings appeared in 1990 before switching to F-15 DJ.

Platz reproduces the T-2 in 1/72 scale. The kit is an unpainted assembly plastic model kit without glue and paint included.
This early scheme version is Light Gull Grey based painting and available to reproduce the aircrafts between 1981 to 1985 around. Realistically reproduce sharp aircraft shape.
The silk-screen printing decals are printed by Cartograf with high quality and fine colors, and include all marking of T-2 Aggressors. The finish is 248mm in length, and 109mm in width.