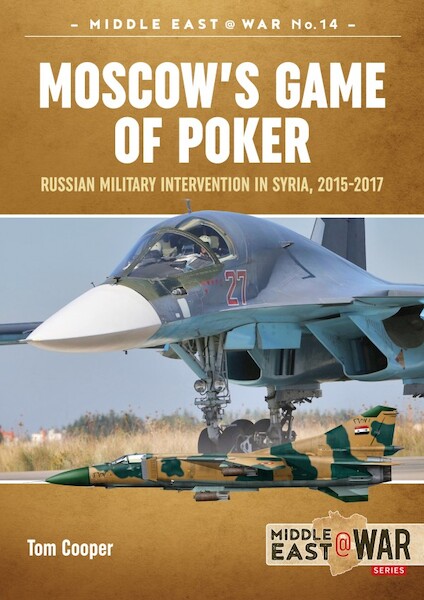 This product was added to our database on Tuesday 30 October 2018.

In August 2015, the government of the Russian Federation embarked its military forces on an intervention in Syria. Ever since, there is no end of discussions about Russian military capabilities and intentions ? in Syria and beyond. To many, the performance of the Russian military ? and especially the Russian Air-Space Force (VKS) ? in this war was a clear demonstration of advanced technology, improved training, fearsome firepower, and great mobility. To others, the military operation only experienced limited success and exposed a number of weaknesses. Foremost between the latter are aircraft ill-suited to the necessities of expeditionary warfare, and a gross lack of advanced weaponry and equipment. While the military component of their intervention can only be described as providing clear evidence that the Russian military is in no condition to directly challenge the NATO's eastern frontiers, it cannot be denied that through this action Moscow instrumented a turning point in the Syrian Civil War, and indeed one on geo-strategic plan. Organized and run in cooperation with very diverse allies ? ranging from the Islamic Revolutionary Guards Corps of Iran (IRGC), Hezbollah of Lebanon, the Kurdishan Workers Party (PKK) and a myrad of local warlords and their armed militias ? their combination of intentional bombardment of insurgent-controlled parts of Syria, and indirect protection for the IRGC's own military intervention in the country from a possible counter-intervention of the West, the Russians did succeed in saving the regime of the Syrian President Bashar al-Assad. Through this, this campaign created an absurd precedent in newest history: a brutal dictatorship involved in systematic elimination of hundreds of thousands on industrial scale, and frequently with help of chemical weapons, was even made popular within circles of far-right and far-left alike around the World. In turn, the resulting flow of refugees destabilized the European Union and large parts of the NATO ? two parties considered the actual primary opponents by the government in Moscow ? and increased the popularity of the President Vladimir Putin to unprecedented levels. Illustrated by over 130 photographs, maps and colour profiles, 'Moscow's Game of Poker' is providing a clear outline of the participants in this extremely complex conflict, and areas it impacts. It is providing a unique and in-depth study of Moscow's political aims, strategy, doctrine, target selection process, military technology and tactics, day-by-day operations, and the way the Russian Federation cooperates with diverse local allies. This story is told in combination with an exclusive insight into the similar campaign run by what is left of the Syrian Arab Air Force.