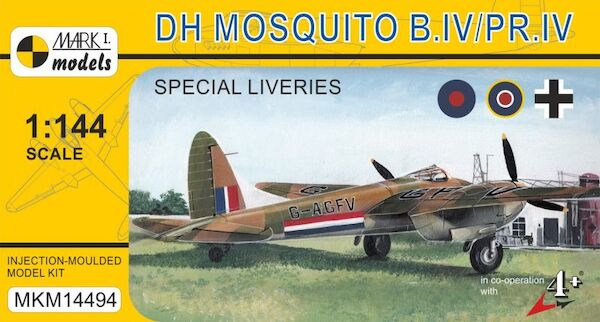 The de Havilland DH.98 Mosquito was a British multi-role combat aircraft developed in 1939. The Mosquito was constructed almost entirely of wood and, as such, it was dubbed "The Wooden Wonder?. Originally conceived as an unarmed high-speed bomber, it was later adapted to many other roles, including day-time tactical bomber, night bomber, day or night fighter, fighter-bomber, maritime interceptor and photo-reconnaissance aircraft. The Mosquito B Mk.IV was a day and night bomber variant, whose prototype first flew in September 1941. Some 300 aircraft were built (incl. Srs.I a/c); Series II model entered service in May 1942. It was a two-seat, twin-engine, mid-wing monoplane, of a composite wood construction, fitted with a retractable undercarriage. The crew was seated under conventional canopy and for bombing a glazed nose was provided. It was powered by two Merlin in-line engines turning narrow three-bladed propellers. Its internal bombload was 2,000 lb (908 kg), while a provision was also made for two 50-gal (227 1itre) underwing drop tanks or two 250lb bombs. 27 Mosquito B Mk.IVs were converted to the PR Mk.IV photo-reconnaissance aircraft, equipped with four vertical and one oblique camera. The first operational flight by a PR Mk.IV was made in April 1942. It was also used by the BOAC as a fast transport aeroplane to carry high-value cargo to, and from, neutral countries, such as Sweden. In 1944 a captured Mosquito B Mk.IV was tested by the Trials and Research Unit of the Luftwaffe.