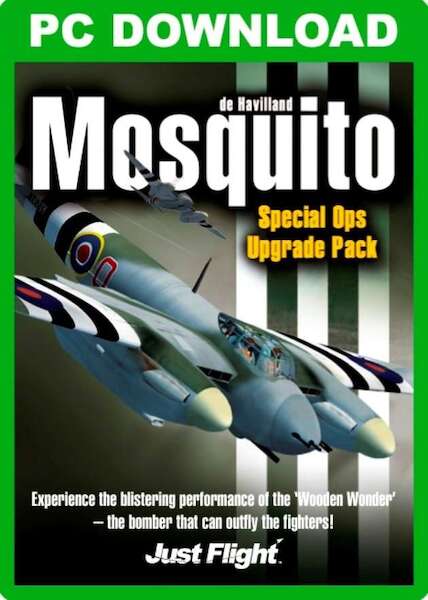 (Note - you will need our Mosquito add-on to be able to add these additional packs.)


B. Mk IV Bulged bomb bay
'AZ-X' DZ637 Series II of Number 627 Squadron, No5 group, flown by Fg Off Ronnie F Pate and Flt Lt Edward A Jackson, Woodhall Spa , 3rd July 1944. A special bulged bomb bay was added to these aircraft to enable them to carry a 'Cookie' 4,000lb bomb. AZ-X participated in the famous raid on Gestapo headquarters in Oslo which was a typical example of the prowess of the Mosquito in low-level pin-point bombing raids.

BOAC Unarmed high speed courier
G-AGFV High speed courier aircraft operated by British Overseas Airways (BOAC) and adapted to carry one passenger in an extremely compact compartment in the bomb bay on high speed envoy missions. The BOAC markings were a pale attempt at trying to convey to the enemy that the aircraft was unarmed. The Mosquito's enviable high speed performance was a very handy defence.

B. Mk IV Highball
DK290/G A&AEE, Boscombe Down April 1943 was a one-off conversion for testing of Barnes Wallis' spinning bomb theory by A&AEE. Highballs were to be used by 618 Squadron in a secretly planned attack on the German Battleship, Tirpitz. However supplies of the aircraft arrived too late and the attack was shelved. 617 Squadron Lancaster's eventually completed the task of sinking the famous battleship, ironically with Mosquito Pathfinders in attendance

ADDITIONAL LIVERIES FOR BASE PACK

As well as the new aircraft and liveries, this upgrade pack also contains extra liveries for the main Mosquito package (DVD-ROM or Download version).


ADDITIONAL LIVERIES FOR UPGRADE PACK B