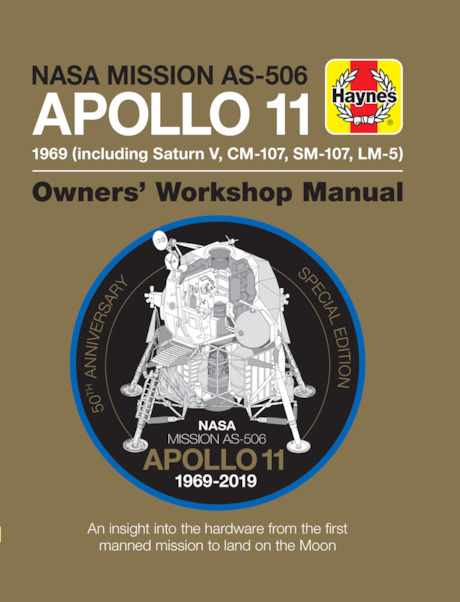 This product was added to our database on Thursday 16 May 2019.

Share this product
Also in this series:
9781785215926HaynesBooks on aviation / Spacecraft
Product description

On 20 July 1969, US astronauts Neil Armstrong and Buzz Aldrin became the first men to walk on the moon.

This is the story of the Apollo 11 mission and the 'space hardware' that made it all possible. This manual looks at the evolution and design of the mighty Saturn V rocket, the Command and Service Modules, and the Lunar Module. It describes the space suits worn by the crew and their special life support and communications systems. We learn about how the Apollo 11 mission was flown – from launch procedures to 'flying' the Saturn V and the 'LEM', and from moon walking to the earth re-entry procedure.

This celebratory anniversary edition features a new look at the legacy of Apollo 11, and a look forward to future manned Moon missions and deep-space exploration.

Dr Christopher Riley is a writer, broadcaster and film maker. He has presented, directed, produced or consulted on almost 30 films and TV documentaries about Apollo, including the multi-award-winning In the Shadow of the Moon.

Phil Dolling is an award-winning Executive Producer. He has worked for the BBC on many television programmes including Tomorrow's World, Space, Human Instinct, James May's 20th Century and Earth: The Power of the Planet. He was also in charge of the coverage of the Total Eclipse in 1999.