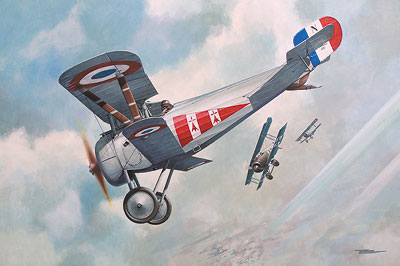 This product was added to our database on Friday 4 february 2011.

Aircraft in WWI often became obsolete, though having barely taken to the air. The fast pace of invention in aircraft design often led to nothing, and some ideas and developments became outmoded, which a year or two before had been considered as progressive and innovative. However, some design approaches, which might be considered simple in many respects, ensured not only great success for certain aircraft, but also a kind of rebirth in later types and variants.
One such aircraft was the Nieuport 17, which can undoubtedly be named among the ten most famous types of the Great War. Built in 1916 it became a real salvation for the Allies' air arms and was built in large numbers. Later there appeared the Nieuport 17bis with a modified fuselage, and in the spring of 1917 the designer Gustav Delage developed
the next new version of the fighter, the Nieuport 24. The fuselage gained a more rounded cross section in comparison with its predecessor and the wings were rounded at their tips. The horizontal and vertical tail surfaces were also very different from previous models, having a more rounded outline. A powerful 130-hp Le Rh?ne engine was installed in the plane.
However, in operational use it was quickly apparent that despite the aircraft's improved flight characteristics, the plane had significant problems in control, because of faults in the tail assembly. Although it was elegant, testing proved it to be too fragile. The designers were persuaded to give up the 'elegance' of the aircraft in favor of the old but time-proven and battle-tested tail design, the same as in the Nieuport 17. This machine could not be considered a brand new type, and so it was designated the Nieuport 24bis. This modification process took until the summer of 1917, and then when the 24bis started to arrive in the combat units, it was found that its predecessor the Nieuport 17 had been completely dislodged by SPAD fighters. For the Nieuport 24bis a place was found mainly in training units, but many machines did appear at the front. The famous French ace Charles Nungesser flew a Nieuport 24bis in combat.
At this time the United States, which had just entered WWI, started organising their own Air Force from scratch, and they bought from the Allies all available types of aircraft to make up the complement of their air arm. France sold at least 140 Nieuport 24bis to the U.S., about a hundred Nieuport 24, and almost three hundred of the Nieuport 27. None of these several hundred planes saw combat, their fate until the end of the war limited to the training of future pilots. After the war many Nieuports were sold to private owners, while all other machines were sent for scrap.
Apart from France and the U.S., the Nieuport 24, 24bis and 27 were used to a limited degree by the Royal Air Force of Great Britain. A small amount were sent to Russia where they survived the October Revolution of 1917, and appeared in the ranks of the White as well as the Red Army. Several machines were used by the Air Forces of Poland, Japan and Romania.