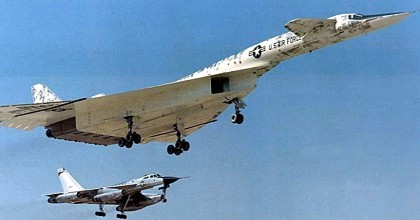 This product was added to our database on Thursday 13 March 2008.

In 1955, the USAF issued requirement for a strategic bomber with the B-52's range/payload and the B-58's supersonic speed to replace these bombers by 1965. Competition between Boeing and North American for the contract occurred during the design phase. In 1958, the North American's exotic design was chosen and a development contract for three prototypes, XB-70 was awarded. At the same time North American was also developing the proposed XF-108 supersonic interceptor intended to escort the B-70. In 1960, the U-2 spy-plane was shot down over Soviet territory. The USAF shifted quickly away from high-altitude supersonic bombing. In 1961, with a growing of ICBM force which were more cost effective, President Kennedy announced that the B-70 program was cancelled. The two prototypes were changed to research only. The first XB-70 made its initial flight in 1964, and achieved Mach 3 flight in 1965. The second airplane first flew in 1965, but on June 8, 1966, it crashed following a mid-air collision. The first airplane continued in its research program until flown to the museum in 1969.