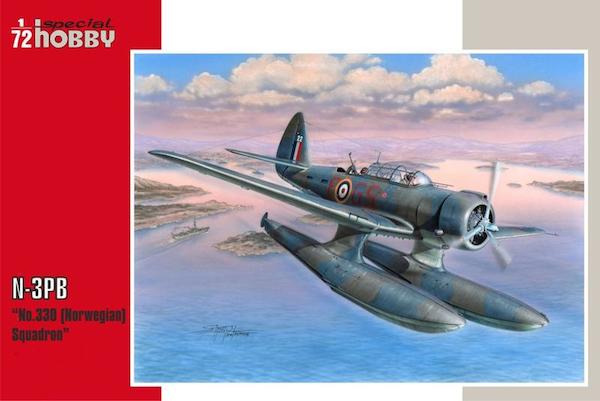 This product was added to our database on Friday 28 August 2015.

All new kit, not a reissue of the old MPM boxing

Northrop N-3PB 'No. 330 (Norwegian) Squadron RAF'. The N-3PB were being operated by No.330 (Norwegian) squadron based on Iceland for a quite long period of time. Initialy, the planes flew with the early RAF type of roundels and with fuselage numbers instead of squadron codes which were incorporated later on. During 1942, a new type of RAF markings was introduced and replaced the older ones also on the N-3PB airframes and the colour of the fuselage codes was changed as well. The decal sheet covers all the above options and caters for three machines, one with the initial markings and numbers on the fuselage and the other two with the fuselage code letters in two different colours and wearing the early and also the later style of the RAF roundels.
The kit features three grey styrene runners and one with the clear parts. Some of the smaller parts were created using our advanced CAD design and a metallic insert in the standard moulds will assure their best possible quality. Among those 3D-designed parts is also the beaching gear. The photo-etched fret takes care of some interior detail, water rudders and mooring points.