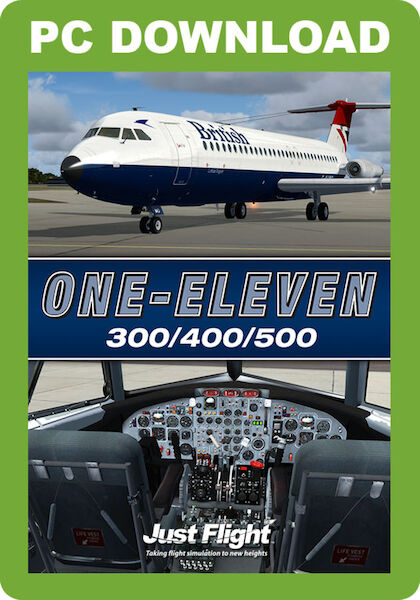 This product was added to our database on Tuesday 11 july 2017.

This popular British Aircraft Corporation (BAC) jet airliner flew from the 1960s until a widespread retirement in the 1990s and was intended to replace the very successful Vickers Viscount on short range routes. As with several other aircraft of the era, the introduction of European noise restrictions hastened its demise!

This package for FSX and P3D includes the 300, 400 and 500 variants along with 12 high quality airline liveries from around the globe and combines all the latest modelling and texturing techniques with accurate flight dynamics and realistic sounds to bring you an authentic simulation of this iconic aircraft. In this simulation you will find several variations on the 500 Series theme. BEA used fuselages without the forward built-in airstairs, for example.

Separate Virtual Cockpits for the 300/400 and the 500 models are included, with the Smiths flight system in the 500 Series models instead of Collins, the hydraulic panel relocated to the overhead panel and roof-mounted panel switches operating UP for ON instead of down.

Each model has been built over the most accurate plans available and the deafening sounds of the Rolls-Royce Spey jet engines are faithfully reproduced.

The basic design programme for the One-Eleven began at Hunting Aircraft and was completed at BAC when the Corporation was formed by the addition of Hunting and several other British manufacturers in 1960.

The 300/400 Series (apart from small differences in take-off weights and other data, the two were indistinguishable) used a more powerful version of the Rolls-Royce Spey jet engine and in July 1963 American Airlines began placing orders for thirty 400 Series aircraft, making them the largest ever operator of the BAC One-Eleven.

British European Airways (BEA) was instrumental in the development of a stretched version of the 400, the 500 Series. This model became known as the 'Super-One-Eleven' and as well as the longer fuselage had a wider wingspan, strengthened undercarriage and other modifications.

In the cockpit, BEA wanted to have commonality between its operational types so the instrument panels and avionics were changed to the 'Smiths' type to match those in aircraft such as the Hawker Siddeley Trident. BEA even went as far as changing the switch directions so that pilots could further reduce the time it took for conversion to type.

The One-Eleven was a very loud aeroplane! The roar from the Rolls-Royce Speys was significant and pressure from civilian authorities called for remedial measures to be adopted. As a result, many aircraft were fitted with 'hush kits', which were effectively a secondary silencer or muffler on the end of the engine nacelles. These were expensive modifications and many operators chose to decommission their One-Eleven fleets rather than face the high cost of bringing them up to modern noise abatement standards.

One-Elevens remained in full-time service with many operators well into the 1990s and the last operational example was finally retired in 2012.

Cockpit features:
Highly functional 3D cockpits with virtually all of the hundreds of switches, knobs and levers animated and functional. Many gauges are modelled in 3D for smooth operation.
Separate Virtual Cockpits for the 300/400 and the 500 with the Smiths flight system instead of Collins, the hydraulic panel relocated to the overhead roof panel and roof-mounted panel switches operating UP for ON instead of down
Unique anti-stall stick pusher and stick pusher dump operation
Full cockpit lighting with atmospheric instrument backlighting
Special 'baked' textures have been used to present a well-used look and feel to the cockpit area and controls
Avionics include autopilot functionality from the operating period with NAV and ILS approaches, VOR and ADF receivers and displays, transponder and a full communications suite
Many features have been added to help with 'usability' such as switches to hide the control yokes for a better view of the instruments and pre-set angled views for the overhead panel, throttle quadrant and radios
Numerous warning annunciators will illuminate on fault detection and a fully functional engine fire warning and protection/extinguishing system are built into the cockpit. If you get an engine fire warning, pull the fire handle and the fire will be extinguished.
Electrical systems have been authentically modelled to enable correct APU and engine starts
Instruments include all the regular flying necessities including Artificial Horizon Indicator (AHI) with flight director, fully functional Horizontal Situation Indicator (HSI), VOR and ADF, Radio Altimeter and a full working suite of engine gauges
Full avionics and comms package included with detailed, tuneable radio heads and realistic digit read-outs
Realistic 'cold and dark' cockpit starts are possible
Pre-set camera views for all essential stations
Comprehensive electrical and fuel system panels
Windscreens are textured with reflective effects and display 'Perspex splintering' when viewed in direct sunlight.

Sounds:
The distinctive and noisy Rolls-Royce Spey engines been captured to give the utmost realism in full stereo along with switch click and knob effect sounds.

A supplied utility allows the default FSX Cessna fuel pump sound to be disabled (and re-enabled) for a more authentic atmosphere in the cockpit.

Manual:
A comprehensive cockpit guide is provided in illustrated PDF format and includes a tutorial at London Gatwick on aircraft operation and handling.

Paint kit:
A professional standard paint kit (46MB) for all three models can be downloaded so you can create your own liveries.