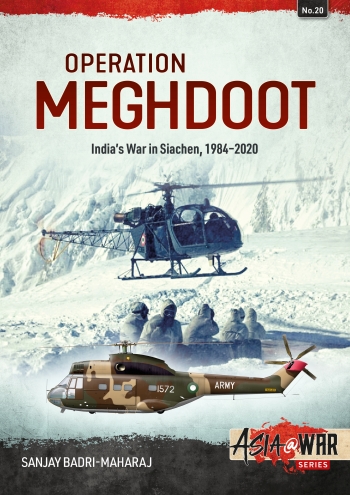 In 1984, the Indian Army carried out a stunning operation that captured the Siachen Glacier in the northernmost regions of what is now the Union Territory of Ladakh.

Since that time, a full brigade of Indian troops has faced off against a similar number of Pakistani soldiers in the highest battlefield on earth. Sustained by a combination of tenuous road supply lines and air support, where helicopter manuals have had to be rewritten, the two countries have had numerous skirmishes that have escalated into the use of artillery fire.

Operation Meghdoot tells the story of this conflict. Beginning with the trauma of partition and the first Kashmir war that saw the region divided between India and Pakistan, it progresses to the 1962 Sino-Indian war which saw the Aksai Chin region lost to China and the Shaksgam Valley unilaterally ceded by Pakistan to China. The consequence of this was to allow the development of the Karakoram Pass and highway to link China to Pakistan.

In the aftermath of Pakistan's defeat in the 1971 war, the mapping of the area created sufficient confusion to enable both India and Pakistan to assert their respective claims. This eventually led to Operation Meghdoot which enabled India to secure the entire Siachen glacier, pre-empting Pakistan's Operation Abadeel.

Operation Meghdoot examines the political, geographic and geopolitical imperatives that drove both sides towards conflict in this inhospitable area. The evolution of India's mountain divisions with their attendant expertise is discussed as well as the air support capabilities available to both sides. Operation Meghdoot itself is discussed in detail including its planning and execution, and the conflict since 1984 is chronicled with an emphasis upon the military engagements, the use of air power and the struggle of both armies to adapt and cope with the environment. Finally, the implications of India's hold on the Siachen Glacier is analysed with respect to its position against a hostile Pakistan and an increasingly hostile China.