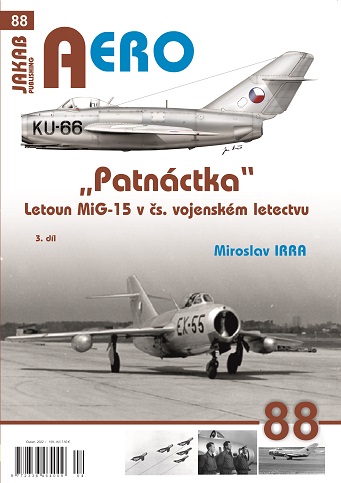 This product was added to our database on Friday 6 May 2022.

Another workbook of the Aero edition brings a continuation of the history of the use of the classic Fifteen in Czechoslovakia. aviation. Despite the great reorganization of Czechoslovakia. Air Force in 1958 and its material and personnel consequences we get to the 60s, marked by a gradual slowdown in traffic, especially the original fifteen and the advent of new supersonic types of aircraft. At that time, the fighter-bomber version of the MiG-15SB, created by rebuilding originally purely fighter aircraft, and a small number of MiG-15Ts for target tracking, still serve. In the next passage, the reader will get acquainted with the experiment, which was to ensure a sufficient advance of the pilots in case of war. This was done in the form of training pilots with basic training in Svazarm, who after retraining on the MiG-15 and further training in combat units were to remain in the position of reserve pilots, called for regular maintenance training in units. However, experience has shown the unreality of this intention, especially with regard to their position among pilots - professional soldiers and the limited possibility of their further professional growth. Also in connection with the introduction of increasingly complex and demanding techniques, maintaining the required level of their training would be very problematic. Finally, the MiG-15 is introduced from a technical point of view, its armament and the then method of shooting training of pilots, there is no omission of all aircraft delivered from the USSR and our licensed production. Attention is also paid to Czechoslovakia. modifications of the basic type on the MiG-15SB and T, including a list of such modified aircraft, a description of the development of missile armament for the MiG-15SB and its tactical and technical characteristics.

The publication is in A4 format, full-color on high-quality coated paper, V2 binding, 52 pages, a number of photographs, color side views.