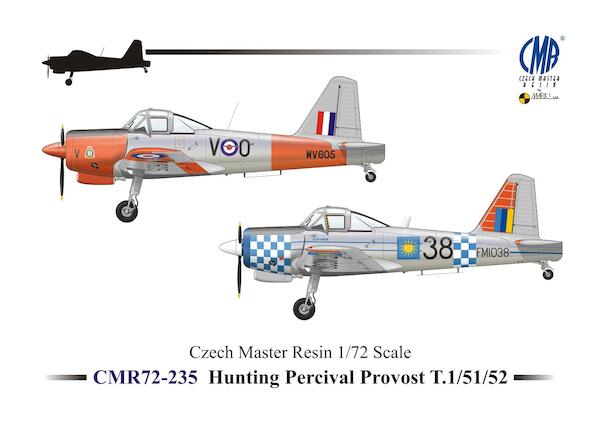 This product was added to our database on Thursday 29 November 2012.

The Provost was a single-engine basic trainer designed in late 1940s by Hunting Percival to Air Ministry specification T.16/48. It was a low-wing monoplane with a fixed tailwheel undercarriage. It had two-seats side-by-side with dual controls and a sliding canopy. The production aircraft, of which some 460 had been completed by 1956, were powered by then Alvis Leonides 25 radial piston engine.
The Provost entered service with the RAF in 1953 with the Central Flying Schools. The aircraft served with the RAF until the early 1960s, when it was replaced by the Jet Provost. The piston-Provost was also exported, with the first order placed by Southern Rhodesia, while a number of aeroplanes were also obtained by Ireland, Burma, Sudan, Oman and Malaysia.


This full resin kit contains 43 parts, including various external stores, vacu canopy (a spare set is included for modeller's convenience), four clear parts and two photo-etched frets (one coloured one). The decal sheet also includes a full set of stencils, for which placement on the kit a detailed diagram is included in the highly-detailed instruction leaflet.