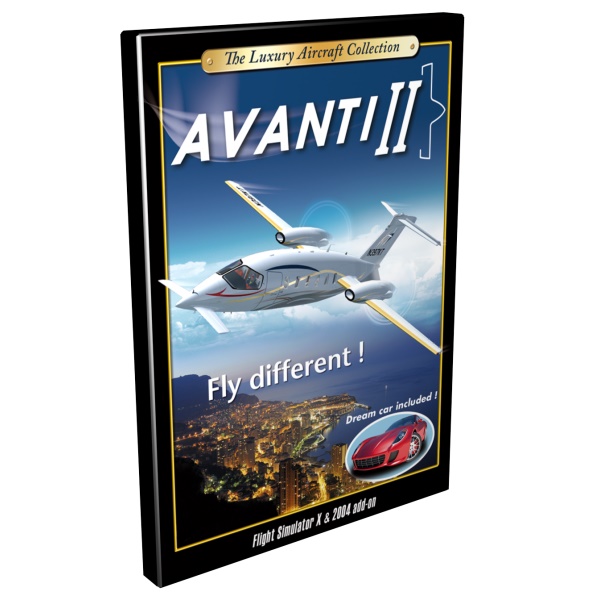 Here is the most highly detailed, accurate rendering of the futuristic Piaggio P180II.

The landing gear operation is highly realistic and detail extends to brake-lines and electrical connections. Landing lights extend and retract and the unique canard forward flap system is authentically modelled and animated. Luggage hatches open and close as does the port engine cover which conceals a fully-modeled turboprop engine complete with big bore exhaust pipe, hydraulic and electrical lines and more.

The pilots are uniquely modelled with realistic features and life-like movements and the passenger cabin comes complete with passengers. The cockpit is a work of art in its own right. Numerous complex systems and fittings have been modelled in and rendered with texture art that really brings the Virtual Cockpit alive. Glass cockpit arrays and flight consoles bristle with switches and knobs that are great to look at and function like the real thing.

The Flight Management Computer is there and allows inputs for flight-planning and performance settings.

Piaggio P180II Avanti is exciting and challenging to fly and will bring many hours of flight simulation enjoyment!


WEATHER RADAR FEATURES :
Wilco’s Piaggio P180 Avanti II is equipped with the Wx500, the industry-leading weather radar simulation for Flight Simulator. The technology proved to reliably detect the clouds and water bodies position and actually distinguish between the several types.

Wx500 is built with the Reality XP’s avionics expertise and is enhanced with the latest technologies to deliver an unmatched and ultra realistic simulation of modern onboard weather radar as well as a solid training aid. Some amazing and unique features are: