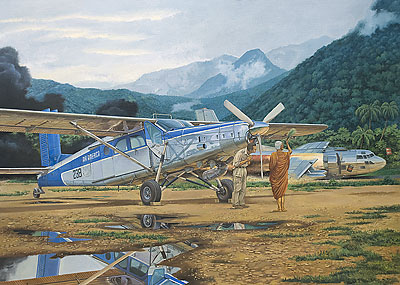 An airline was founded in the U.S.A. in 1946, under the name "Air America". At first sight, it was an entirely ordinary event, as private air transport had been practiced for a long time in this country, and so the appearance of yet another airline was unexceptional.
However, this new company actually belonged to the Central Intelligence Agency, with the primary purpose of reconnaissance activity beyond its own borders, which is why Air America's activities in that period were always concerned with out of the ordinary air transportation.
The headquarters of the airline were in Washington, D.C., but this was an elaborate and fictitious front, as in a democratic society like this the politicians strictly supervised the activities of the C.I.A. and other such agencies. The primary purpose of Air America on its foundation, and in future, was to support the covert operations of the C.I.A. in the planet's "hot spots".
One of the hottest spots at that time appeared to be South-East Asia. Only recently the war in Korea had split the country into two parts, and following on from that the tensest situation was in Vietnam, where the U.S.A. and the Soviet Union vied to turn the conflict to their advantage, and ignored no potential way of achieving their purpose.
At the end of the 1950's the Air America fleet consisted of forty, fifty aircraft or more and was very mixed: pilots flew a variety of types, beginning with small Beechcrafts and then twin engine C-123 Provider transports. They mainly operated out of bases in Thailand, and also in Taiwan and Japan. The main flight destinations were not only Vietnam; there were also permanent routes to Laos, Cambodia, Burma, and China.
The missions of Air America flights were extremely varied. Sometimes they took military specialists to dangerous flashpoints, in other cases airplanes delivered cargoes to supply the needs of pro-American factions. Quite often these loads were simply ordinary weapons. The "passengers" of the airline were specialists in blasting work, military doctors, diplomats, and sometimes even V.I.P's, for example future President of the U.S.A. Richard Nixon. Later the airplanes of Air America were sometimes engaged in "dirty work" such as the spraying of Agent Orange defoliant over the jungle.
In 1976 Air America was disbanded and closed down.
On the whole during the active life of Air America around thirty different types of airplanes and helicopters were used. In time, the fleet grew to a few hundred, and the variety of tasks determined the choice of the airline's different types. The best medium transport machines were the C-123 Provider and the C-119 Boxcar, but they executed missions only where landing strips were suitably prepared.
At the same time, there was a need for airplanes capable of repeated take offs and landings in small areas such as jungle clearings, and these airplanes at least had to have strengthened undercarriages, because perfect airfields simply did not exist in this region. One aircraft ideally suited for such work was the Pilatus PC-6 Turbo Porter. This machine was developed in Switzerland at the end of the 1950's and promised to be very successful, and afterwards the American aircraft builder Fairchild purchased a license for the production of the PC-6. American production machines were passed on to Air America, as were others purchased in Switzerland.
The PC-6 appeared to be the ideal candidate for operations in these areas: it only needed a tiny space to take off in, and landing distances were also very short due to carefully designed wing flaps. The capacity of the cargo cabin was good for a single-engine airplane; and the strong construction of the undercarriage minimized the likelihood of destruction of the airplane in the event of a hard landing. The PC-6 was flown more frequently than other single-engine types in the Air America inventory, and an average hour in the air was amongst the highest.
During the production of the film "Air America", the film company endeavored to portray the spirit of the real events as much as possible, and used in filming the same types which had flown for the airline. A C-123 Provider was supplied for shooting by private owners, and the role of the PC-6 was played by the AU-23 Peacemaker of the Royal Air Forces of Thailand, which had been exported previously to that country by the U.S.A. They played the role of their historical predecessors perfectly, and some standout scenes, for example dangerous landings in difficult jungle conditions, let the audience witness the very real capabilities of this wonderful and extraordinarily elegant airplane.