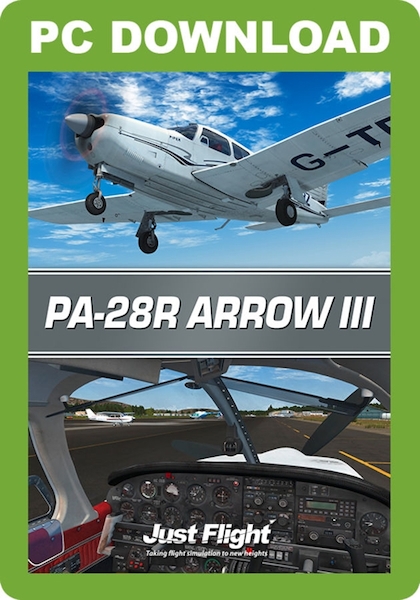 This product was added to our database on Wednesday 7 June 2017.

The PA-28R Arrow III is a four seater, piston-engine aircraft equipped with a retractable tricycle landing gear and constant-speed propeller – an ideal aircraft for touring and instrument training.

The aircraft is flown all around the world and this add-on reflects that global popularity. In addition to our UK research aircraft, G-BGKU, the package features eleven liveries from the USA, Canada, UK, France, Switzerland, Australia and Germany.

A truly 3D virtual cockpit right down to accurately modelled seat belts and screw heads - every instrument is constructed fully in 3D with smooth animations
Cockpit textures feature wear and tear based on reference photos taken in the real aircraft to produce an authentic environment
Easy-to-use tool for switching between heavy and reduced levels of wear and tear in the virtual cockpit
Interactive engine start checklist
Interactive checklists for every stage of flight
Panel state system which will automatically save the panel state whenever a flight is saved and reload the panel state whenever that flight is loaded
Aircraft configuration system that will allow you to choose between 'cold & dark' or 'ready for take-off'
Fully functional and comprehensive IFR capable avionics fit including:
- KMA 20 audio selector unit
- KX 170B COM 1 / NAV 1 radio
- KX 175B COM 2 / NAV 2 radio
- KN 62 DME unit which can display information from NAV 1, NAV 2 or its own inbuilt receiver (NAV 3)
- Piper Autocontrol IIIB autopilot unit with navigation, heading and roll hold
- KT 76A transponder unit
- KR 85 ADF unit with ADF/ANT/BFO modes
- GPS 100 unit
Interactive logbook panel for logging your flight details
Flight computer panel with useful information such as fuel burn, endurance, speed and wind speed/direction
Yoke-mounted flight timer/clock
Independently operated left and right (standby) altimeter
Flight1 GTN and GNS integration in the virtual cockpit (Flight1 GTN/GNS sold separately)

The aircraft is supplied in the following 11 paint schemes: