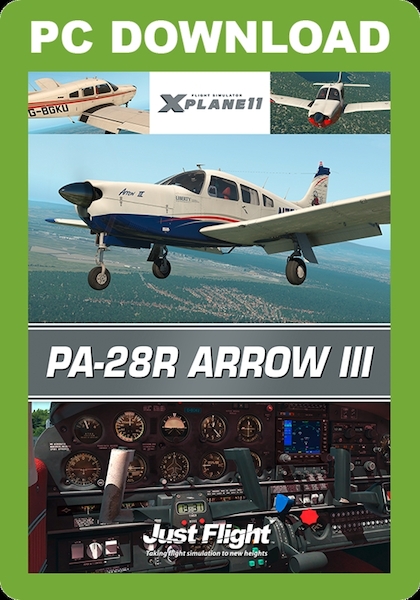 The Just Flight PA-28R Arrow III for X-Plane 11 has been developed to take advantage of all the latest advances in X-Plane and features PBR materials with real-time environment reflections, slow/fast tyre rotation animation and precise shock absorber animation.

The authentic sound set has been generated using X-Plane's state-of-the-art FMOD sound system and a full range of custom cockpit sounds are accurately placed in the stereo spectrum.

Just Flight, in partnership with Thranda Design, are proud to present their first add-on for X-Plane 11 – the PA-28R Arrow III.

Following on from their award-winning TB-10 Tobago & TB-20 Trinidad, Tornado GR1, L-1011 Tristar Professional and Canberra PR9 add-ons, this highly detailed simulation of the PA-28R Arrow III has been developed by Just Flight's in-house team and the team at Thranda Design following comprehensive, hands-on research with a real-life Arrow III, G-BGKU, based at Conington Airfield.

The PA-28R Arrow III is a four seater, piston-engine aircraft equipped with a retractable tricycle landing gear and constant-speed propeller – an ideal aircraft for touring and instrument training.

The aircraft is flown all around the world and this add-on reflects that global popularity. In addition to our UK research aircraft, G-BGKU, the package features eleven liveries from the USA, Canada, UK, France, Switzerland, Australia and Germany.

The PA-28R Arrow III for X-Plane 11 features PBR materials with real-time environment reflections for superb quality and realism, 4096 x 4096 textures for the highest possible texture clarity and numerous animations including a multi-animation passenger door that, when open, responds to G-forces and air resistance.

See the Detailed description below for all the aircraft details!
Detailed Description

The aircraft is supplied in the following 11 paint schemes which can be swapped on the fly using a pop-up window: