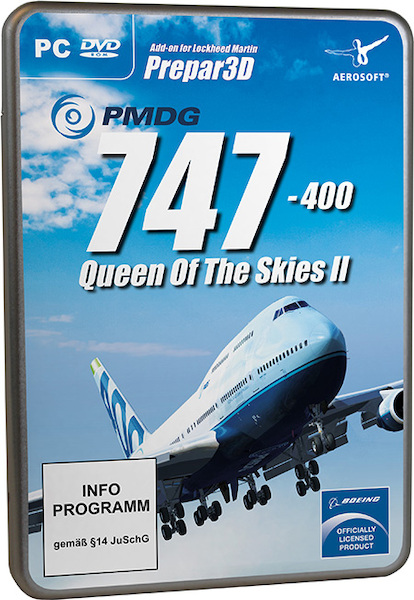 This product was added to our database on Tuesday 14 May 2019.

The most iconic silhouette in aviation. PMDG is proud to present a new simulation of the Queen of the Skies - the Boeing 747-400.

Developed over three years and building upon all of the award-winning features of the PMDG 737NGX and PMDG 777 products, the PMDG 747-400 Queen of the Skies II is our most magnificent creation yet.

We have included every variant of the aircraft in this single package. The ubiquitous passenger 400 and freighter 400F models, the cargo-converted BCF, the "combi" 400M model, the extended range 400ER and 400ERF, and even the rare 400D domestic model that was used in Japan. Each variant is modelled with accurate weights, range and engine options.

No less than 35 pages of detailed options from the world's 747-400 fleets are modelled. From the highly visible ones like antenna types and position all the way to obscure cockpit display and FMC options that real-world crews will recognize, it is the most complete set of options ever placed into an P3D addon aircraft.

System requirements:
Minimum:
Lockheed Martin Prepar3D V3.4+/V4+
Windows 7 64-bit (older OSes such as Windows XP may work, but we cannot guarantee compatibility or support)
Dual Core, 2.5 GHz or faster
4 GB of RAM
Video card with at least 1 GB of VRAM, DirectX 9 compatible Nvidia or ATI card (Onboard motherboard or CPU video is not supported, some of the newer Intel designs may work but we cannot guarantee compatibility)

*Product tested with Lockheed Martin Prepar3D v3.4 and up, not compatible with older versions of Prepar3D.