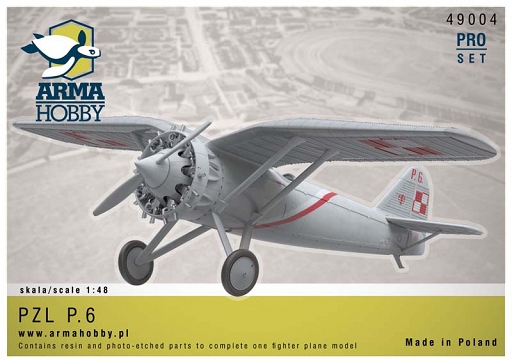 This product was added to our database on Thursday 30 April 2015.

In 1930 fighter P.6 presented at the International Airport in Paris, where he was acclaimed as the most advanced fighter in the world. The following year, 1931, Captain Boleslaw Orlinski won, starting with PZL P.6, air competitions American National Races in Cleveland, Ohio, USA, defeating the world's outstanding pilots such as Ernst Udet from Germany.
On the basis of PZL P.6 Airframe constructed a prototype fighter aircraft PZL P.7, which differs from the engine using a compressor. After comparative tests and trials the Air Force introduced the PZL P.7 as a fighter.

The plane was left in a natural aluminum color, with polished the fuselage surface in characteristic sinuous patterns.

Prototype was originally unpainted natural metal with canvas wheel caps. Then metal caps were attached and painted: National Insignia, name of type, PZL insignia on the rudder and front of cockpit and weight data on the rudder.