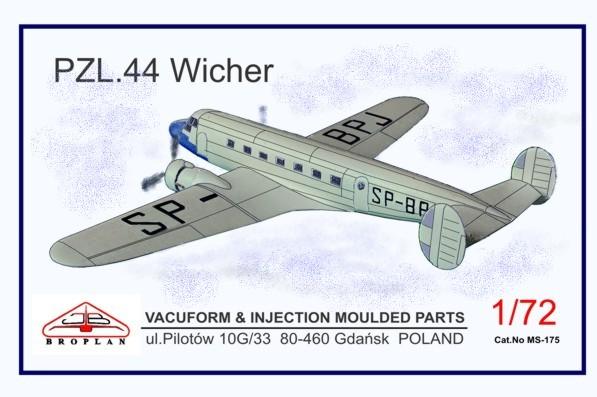 This product was added to our database on Wednesday 30 April 2014.

In mid-1930s the Polish Ministry of Communication ordered a development of an own passenger plane for LOT Polish Airlines, The plane was designed in the state factory Panstwowe Zaklady Lotnicze under direction of Wsiewolod Jakimiuk in 1936-1937.
The prototype was flown on March 12, 1938 by Boleslaw Orlinski. The aircraft was designated PZL.44 Wicher (strong wind). In December 1938 it was given to LOT for evaluation, with registration SP-BPJ. Initially LOT airlines ordered 10 PZL.44s but high cost of a single plane and delays in development were reasons for decreasing order to 4, then for cancelling it in 1939. LOT bought a batch of 10 cheaper Lockheed Model 14 Super Electra in 1938 and 1939 instead.

Wicher was the first modern airliner designed in Poland. Its construction was very modern, but it is estimated that the whole program was too ambitious. Moreover, LOT airlines found operation features of well-proven Lockheed Super Electra more satisfactory. Lockheed offered a possibility of licence production as well. Besides, the Wicher development caused delays in development of new fighter aircraft, like PZL.50 Jastrzab, that were more needed in an advent of the war.

After the outbreak of World War II, on 1 September 1939, the prototype was evacuated from Warsaw to Lwów, but it damaged a landing gear and was left there. It was next captured by the invading Soviets and evaluated in Moscow.